As I walked into the Basilica I was mesmerised by the beauty that surrounded me. I wanted to capture it all with my camera. After a good ten minutes or more (possibly a lot more) I reminded myself to unglue the camera from my face and simply look and soak it all up. The Ravenna Mosaics in Emilia Romagna, in the north-east of Italy, are among the most beautiful things I have ever seen. No wonder these unique early Christian monuments are all listed as UNESCO World Heritage Sites. A few years ago, I was lucky enough to visit four of the eight UNESCO sites, in Ravenna, with the Emilia-Romagna tourist board. 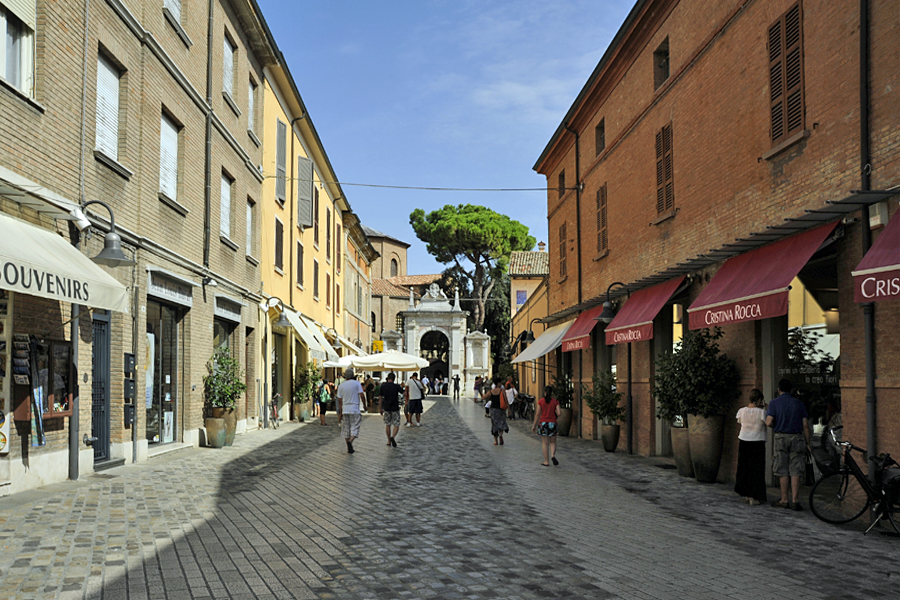 above: The street in Ravenna leading to the Basilica of San Vitale and the Mausoleum of Galla Placidia, below: Piazza del Popolo, the main square in Ravenna 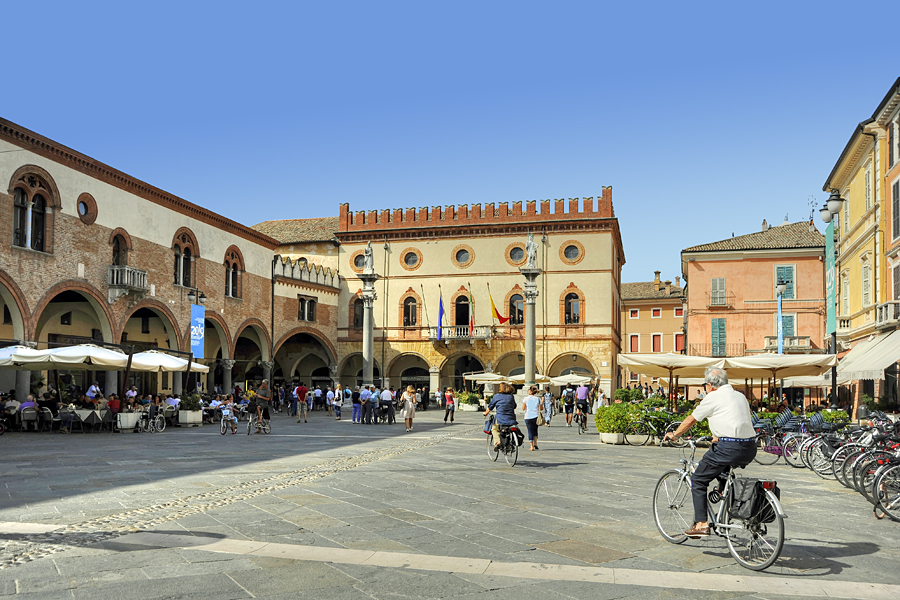 This article was adapted from an article I originally published on my food and travel blog, Travel With Kat. It is available to download for free on GPSmyCity. It can also be upgraded to include an offline map and GPS guided walking tour. Follow this link on your mobile or android device to find out more, Walking Tours in Ravenna.

A brief history of ancient Ravenna

Although the origins of Ravenna are a little unclear, it is believed to have been inhabited as far back as 1400 BC. It fell under Roman control in 191 BC and became the base of the Roman Republic’s naval fleet. The Roman Empire was founded in 27 BC and flourished for several centuries. However, by the 5th century AD, its borders were under constant attack. In 402, the Roman Emperor Honorius moved the capital from Rome to Ravenna marking the start of Ravenna’s heyday and the building of some extraordinary monuments.

The Roman Empire fell, in the west at least, when the last emperor Romulus August was deposed in 476. In the east, however, the empire continued to exist with Constantinople (now Istanbul) as its eastern capital. This became the Byzantine Empire.

Meanwhile, Ravenna was now under the rule of the Ostrogothic Kingdom, the eastern branch of the Goths, a Christian Germanic tribe. Their most notable king, Theodoric the Great (454–526) built some of Ravenna’s most impressive monuments including the Basilica of Sant’Apollinare Nuovo, the Palace of Theoderic, and the Mausoleum of Theodoric.

However, in 540, when the Eastern Roman Emperor Justinian, the greatest Byzantine ruler, came to power, he defeated the Ostrogoths and made Ravenna the western capital of his empire, the “Constantinople of the West.”

The Byzantine Empire’s control of Ravenna ended in 751 when the city was conquered by the Lombards (although the empire itself lasted until Constantinople was taken by Sultan Mehmed II of the Ottoman Empire in 1453).

Ravenna may not be as well known as the likes of Venice, Florence or Rome but it is well worth visiting for its stunning 5th and 6th-century early Christian mosaics built first by the Romans, followed by the Ostrogoths, and then the Byzantines.

When we arrived in Ravenna we headed straight to our first stop, the Mausoleum of Galla Placidia.  It is one of the earliest of Ravenna’s monuments built in the 5th century AD by Galla Placidia, the sister of the emperor Honorius (although it is believed she is buried in Rome rather than in this mausoleum).

As was the tradition, the exterior is rather plain and gave no clue to the wonders inside. Having waited briefly outside in a small queue, I passed through the doorway. My eyes slowly adjusted to the light and I caught my breath at the sight of the lavishly decorated interior made of thousands of pieces of coloured glass. The iconography used represents the victory of eternal life over death. To enable as many people as possible to see the small interior, each visitor is only allowed 5 minutes inside. The lower portion of the walls is marble, while the upper portion and all the ceiling is covered in the most beautiful mosaics I have ever seen. 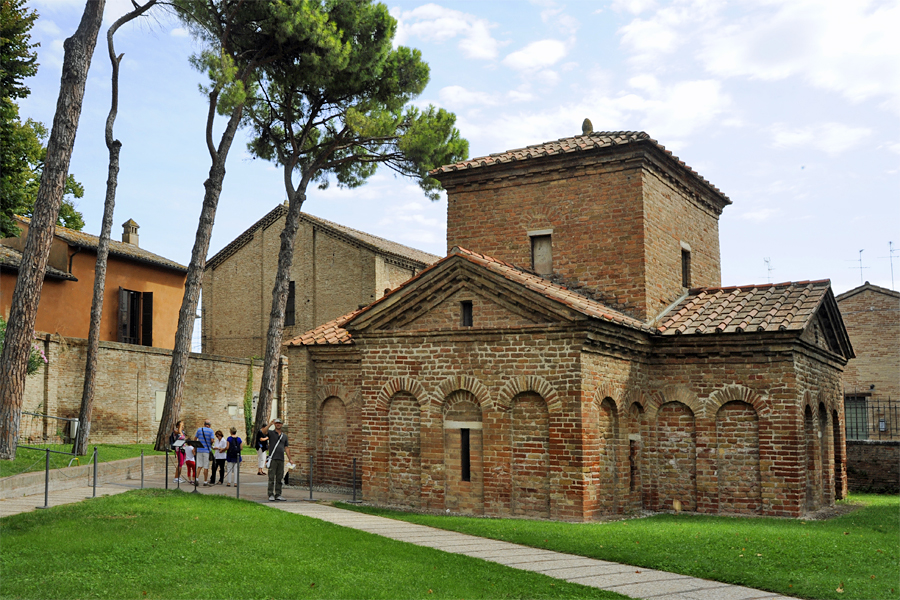 Flickering lanterns would once have made the gold in the Byzantine mosaics twinkle. Now they are lit by electric lights as well as by daylight coming through a few alabaster windows. The lighting made them difficult to photograph and my images do not do them justice. 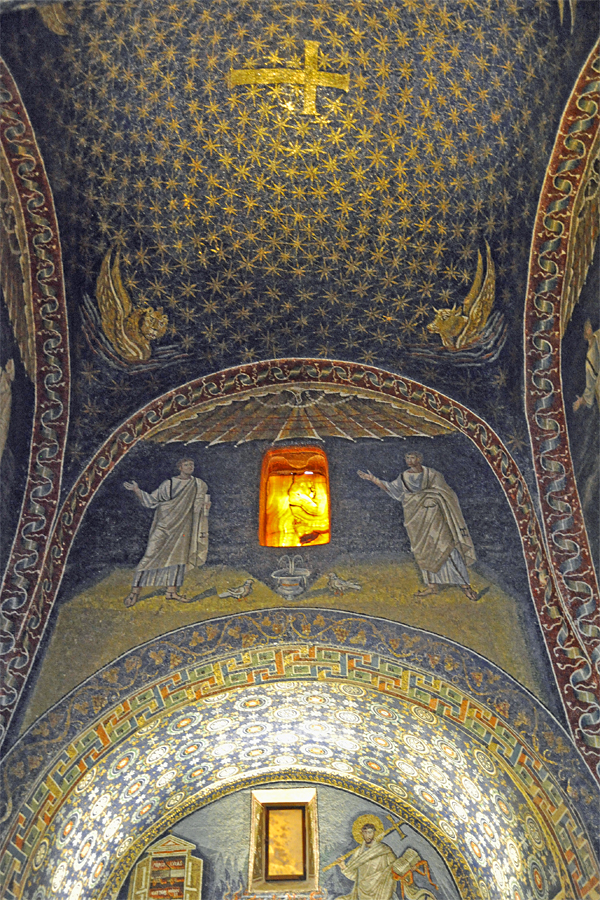 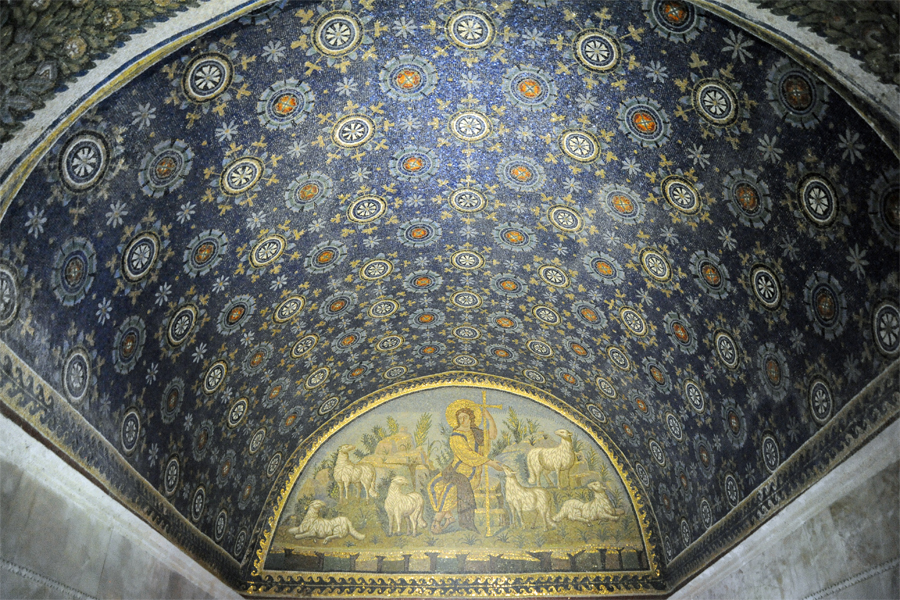 Above: A panel showing Christ as the Good Shepherd tending his flock. 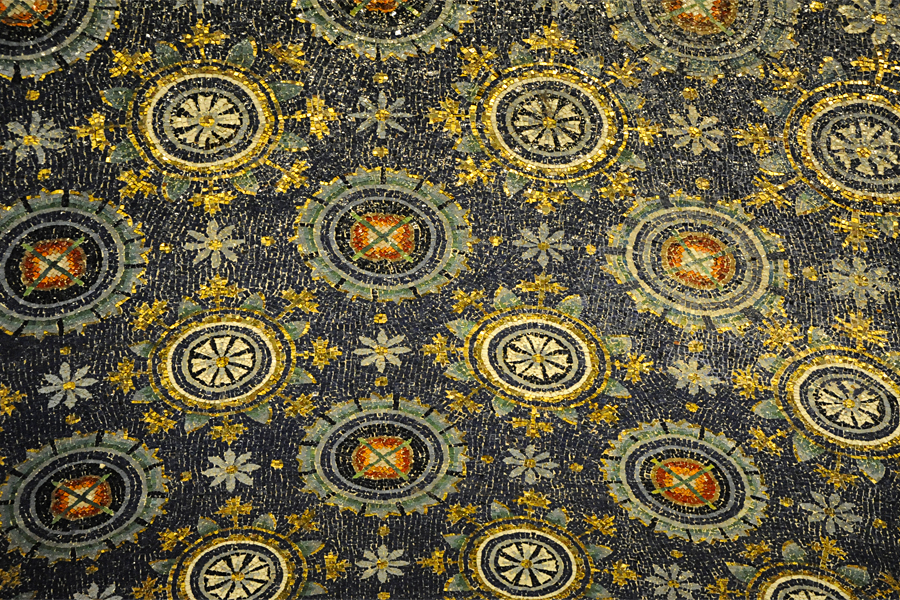 Below: One fo the alabaster windows in the Mausoleum of Galla Placidia 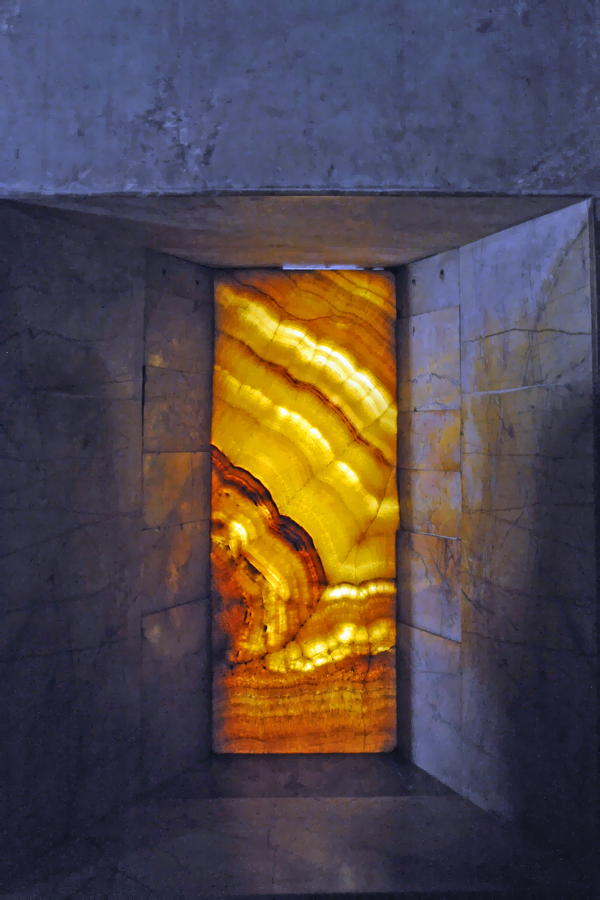 Below: samples of the small pieces of coloured glass used to make Ravenna’s mosaics 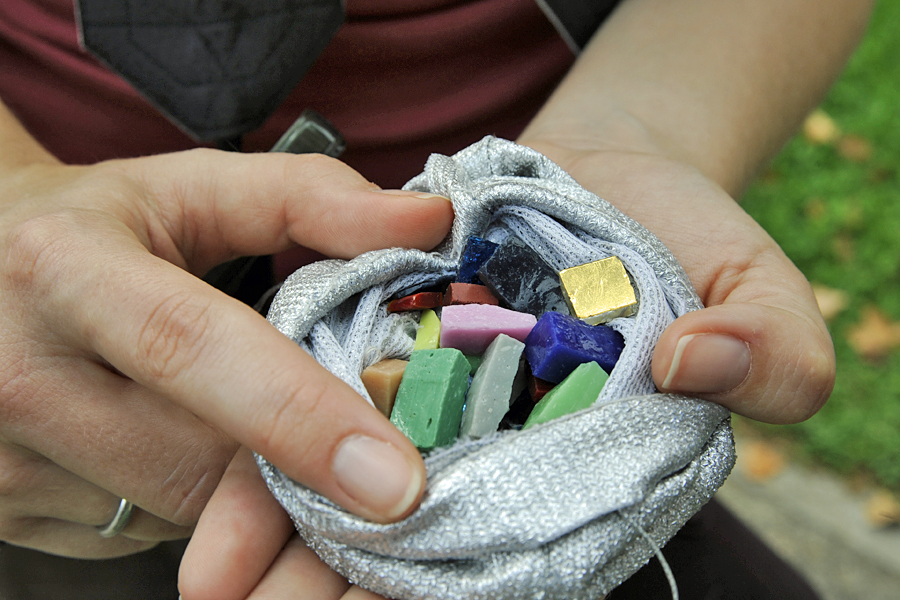 Here you can see how one of the patterns found in the Mausoleum of Galla Placidia can be drawn.

Just a short stroll away across a courtyard, the Basilica of San Vitale is home to some of the finest of the Byzantine mosaics and its understandably one of the most popular of Ravenna’s UNESCO sites.

The basilica is almost 1500 years old. Construction started in 526 by the Goths on the site of the martyrdom of Saint Vitalis but it was the Bynzatines that finished it in 548, having taken Ravenna some eight years earlier. Interestingly, the basilica was built around the same time as the Hagia Sophia in Istanbul, which was originally a Byzantine church, before being converted into a mosque in 1453.

At the Basilica of San Vital, there is no time limit to your visit but again, the lighting isn’t great, and the crowds make photography tricky. 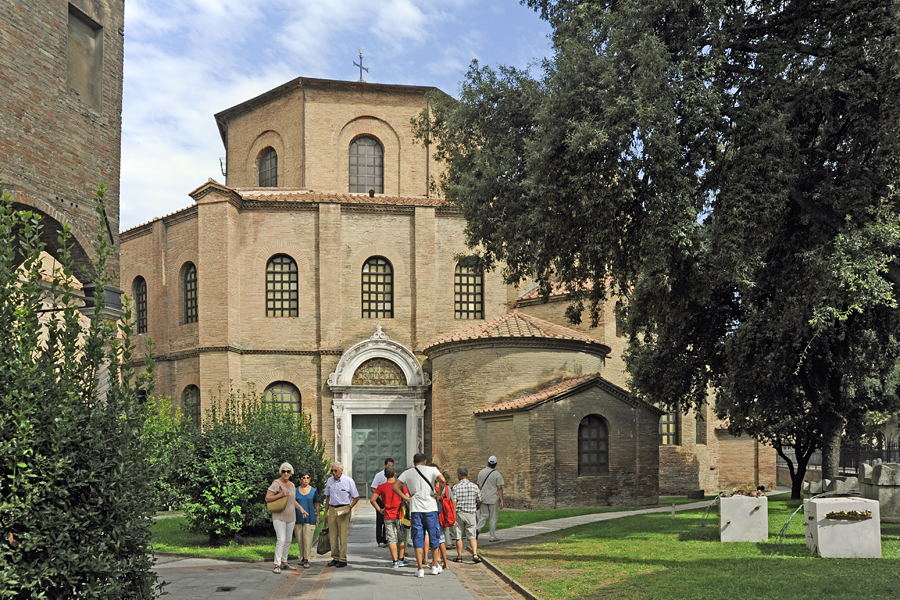 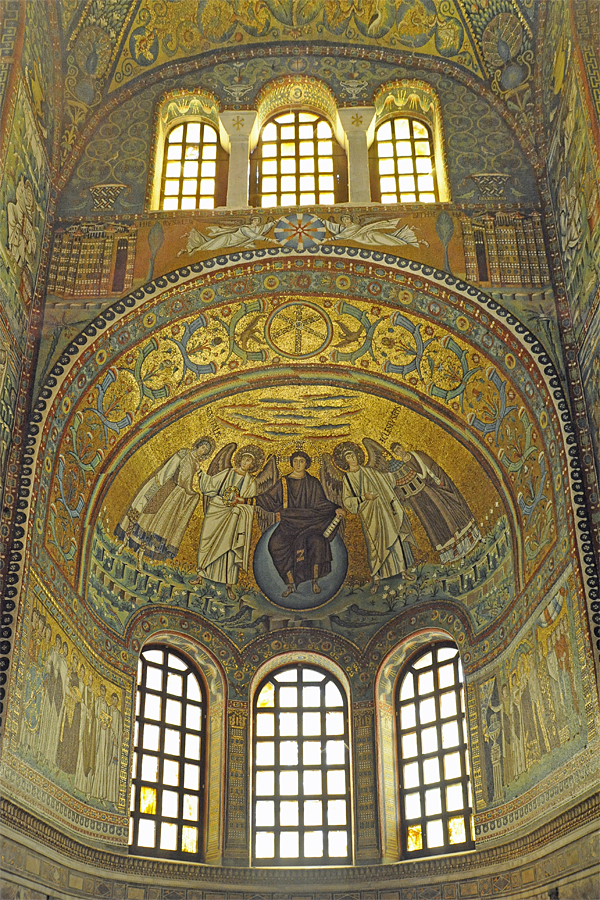 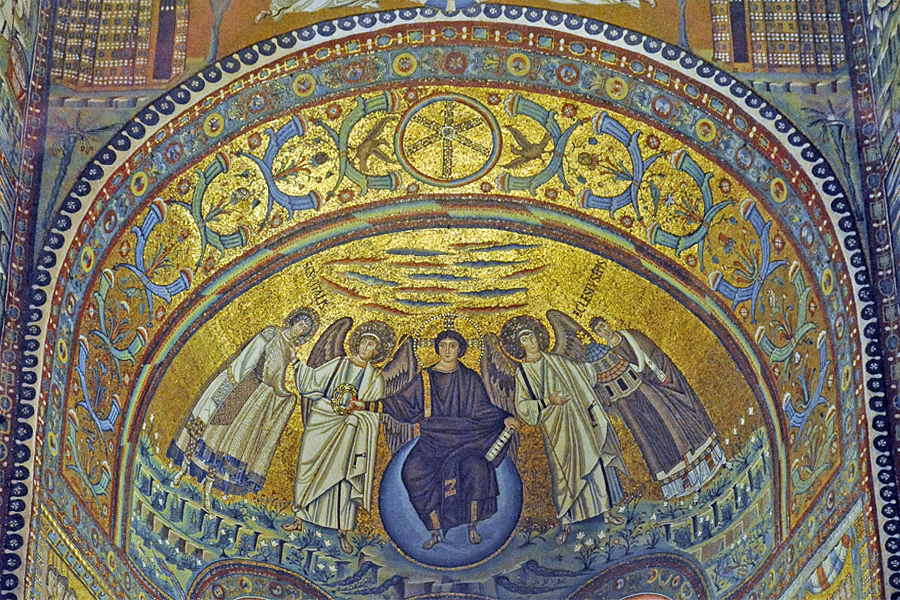 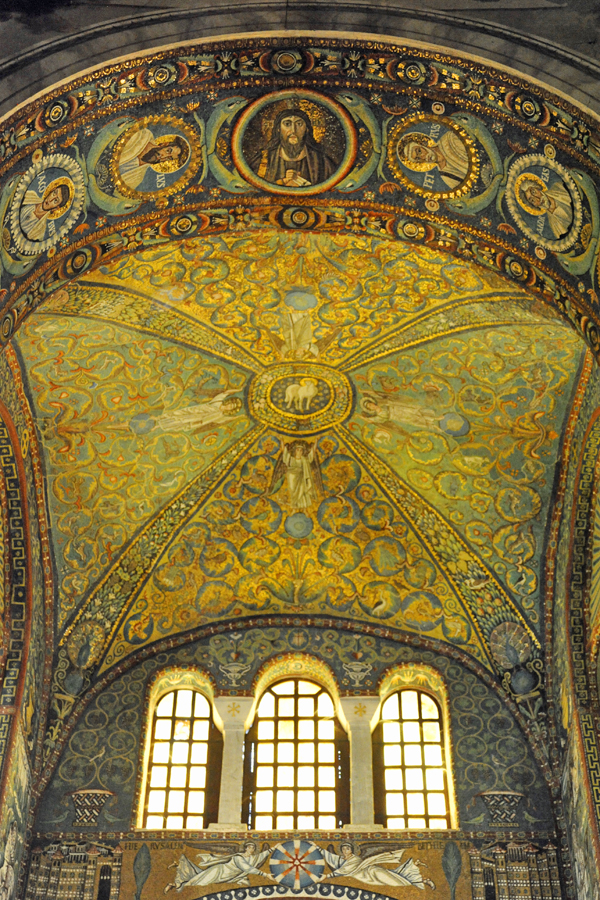 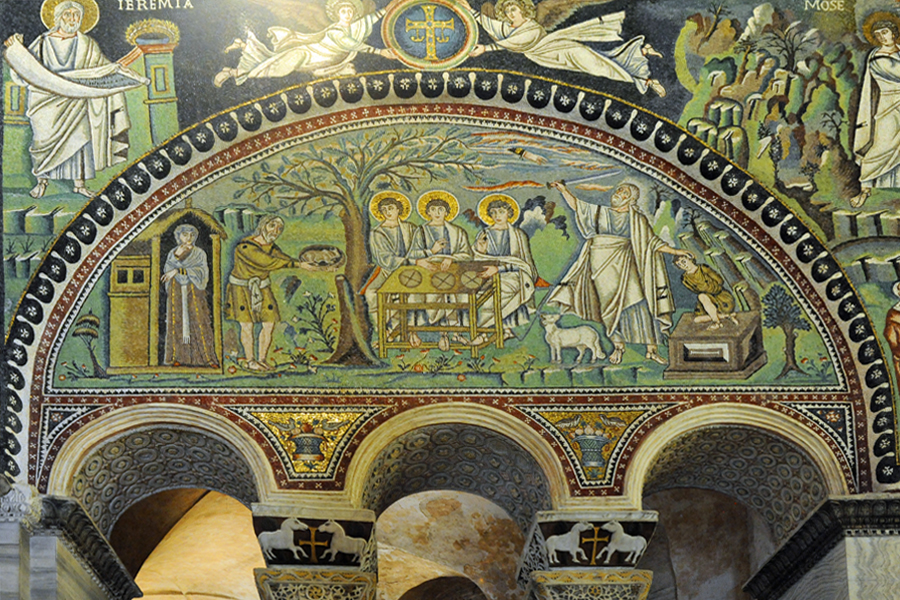 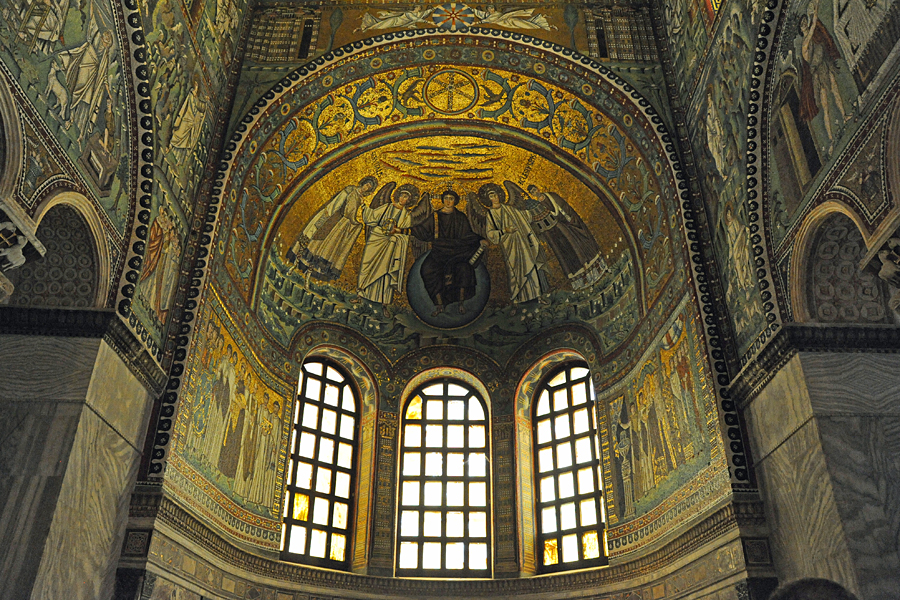 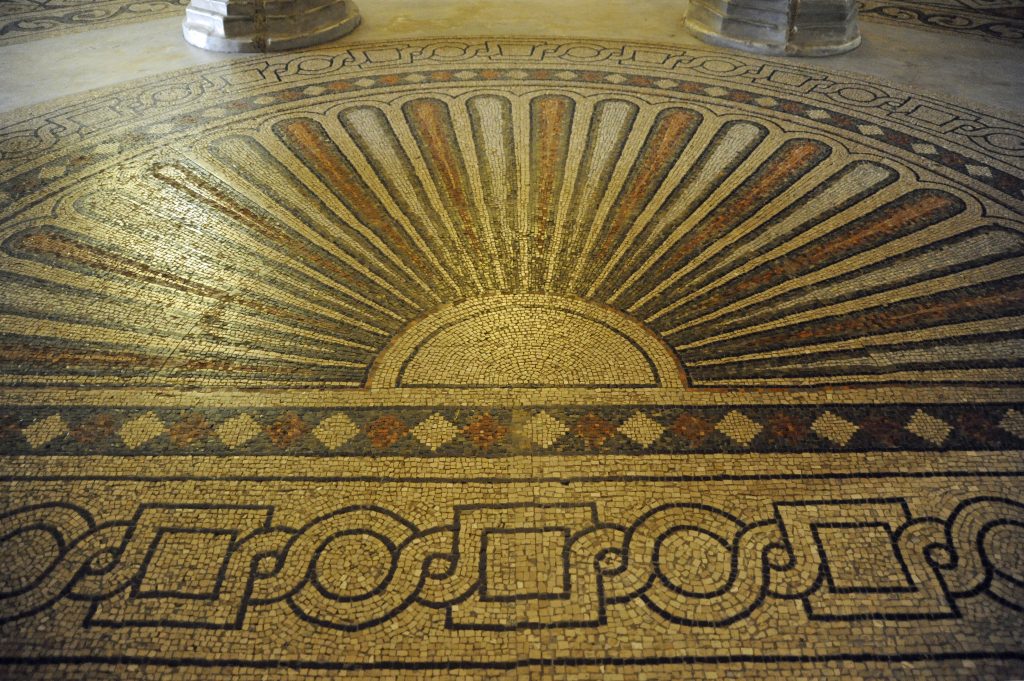 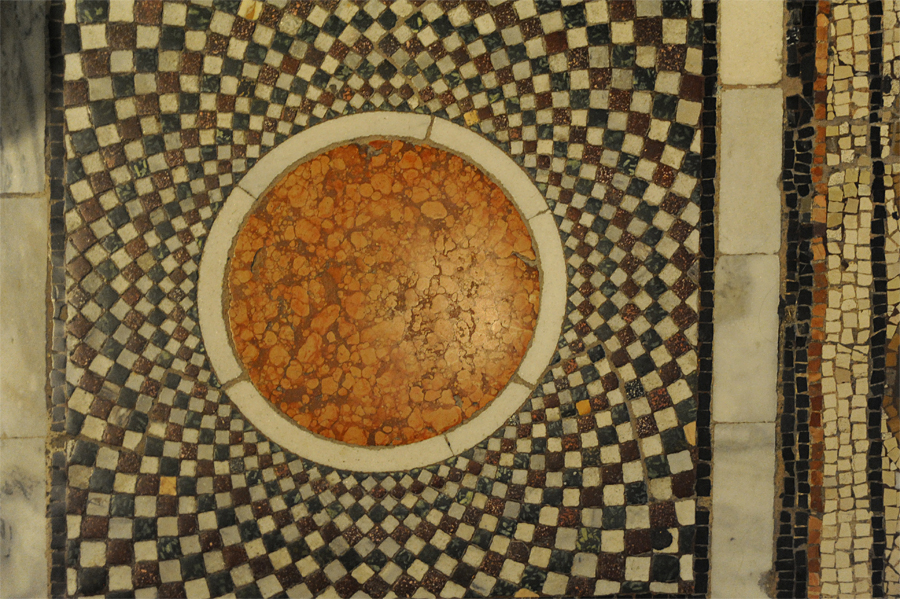 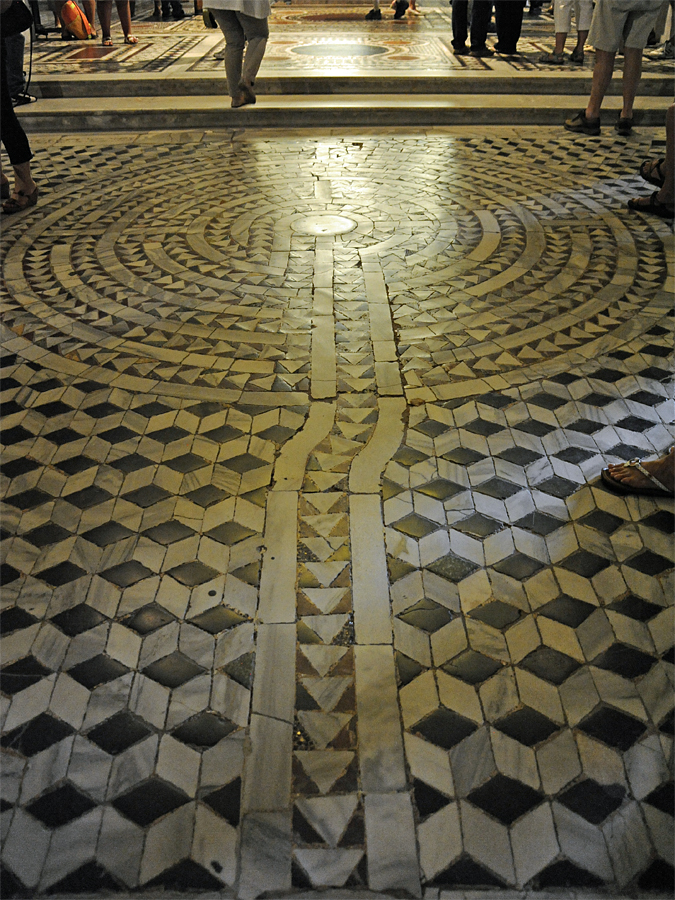 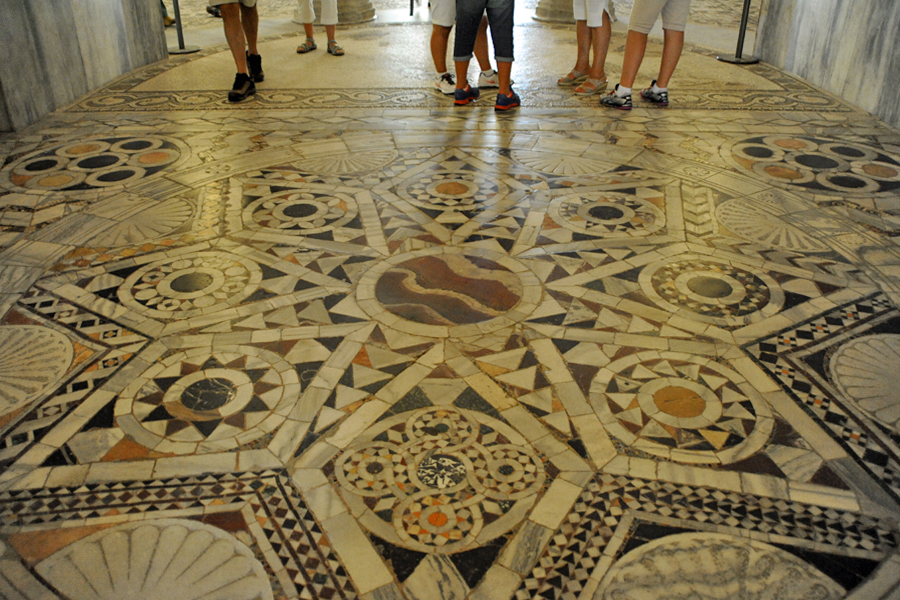 The Great Cupola of Basilica of San Vitale

The great cupola of Basilica of San Vitale is decorated in 18th-century murals which are rather out of keeping with the rest of the church and its Byzantine mosaics. 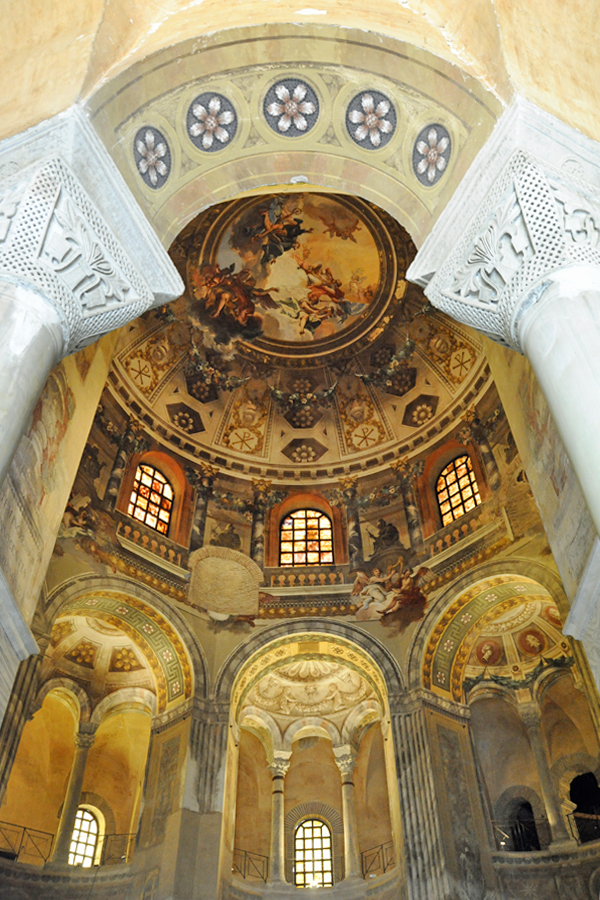 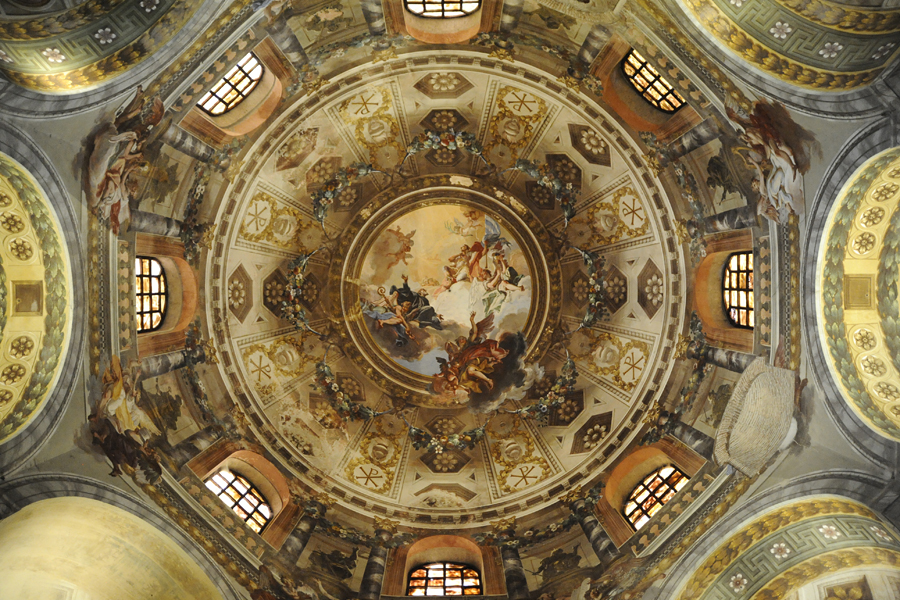 The Basilica of Sant’ Apollinare Nuovo is a sumptuously decorated chapel erected by Ostrogoth King Theodoric the Great as his palace chapel between 533–549 AD. With far fewer visitors, unlike the Basilica of San Vitale, we had the place virtually to ourselves. 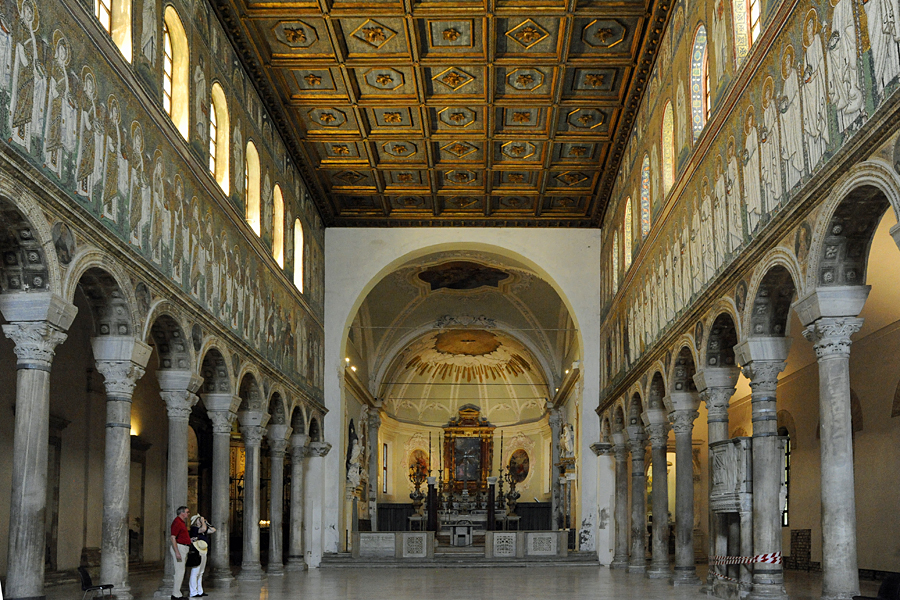 Above: The magi and their gifts in the early 6th-century mosaic, Melchior from Persia, Gaspar (also called “Caspar” or “Jaspar”) from India, and Balthazar from Arabia. 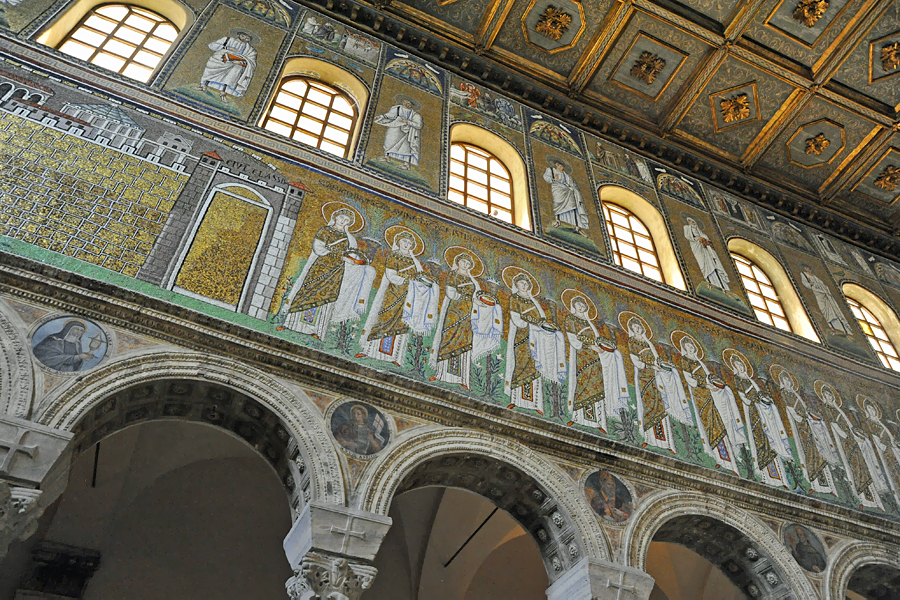 This small octagonal building was also erected by the Ostrogothic King Theodoric the Great between the end of the 5th century and the beginning of the 6th century. 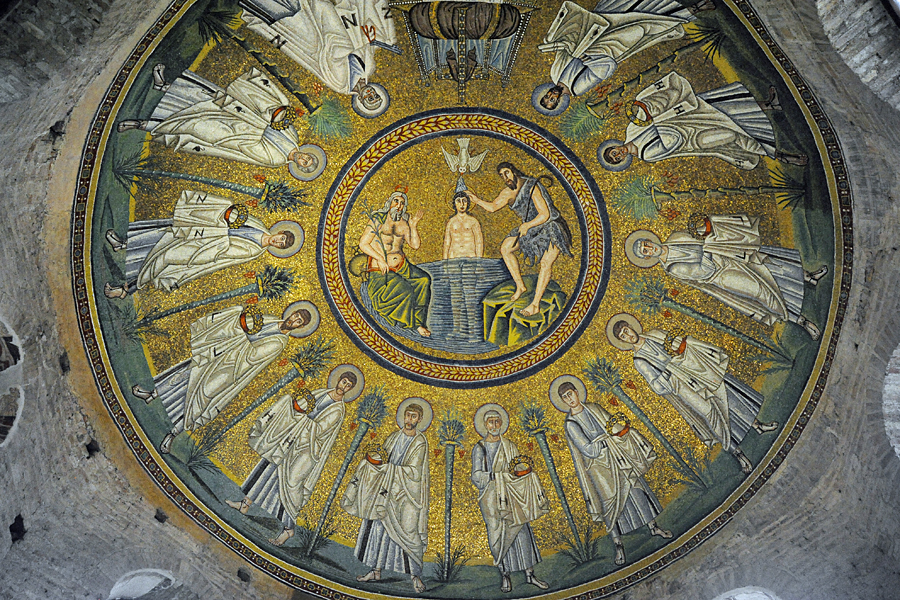 Further UNESCO World Heritage Sites in and around Ravenna

While I only visited four of the UNESCO sites in Ravenna there are another four which I am told are well worth visiting if you have time.

For further information on all these sites, including virtual tours, please visit Tourismo.ra.it.

Basilica di San Francesco and the Tomb of Dante

There are a number of other churches worth visiting not least, the Basilica di San Francesco or rather its crypt. Once inside this 10th-century church (built on the site of a much older basilica) head down under the altar and in exchange for a one Euro coin the crypt lights up to reveal a flooded tiled floor complete with goldfish! Next door to the church you’ll also find the Tomb of Dante, an Italian neoclassical national monument built over the tomb of the poet Dante Alighieri. 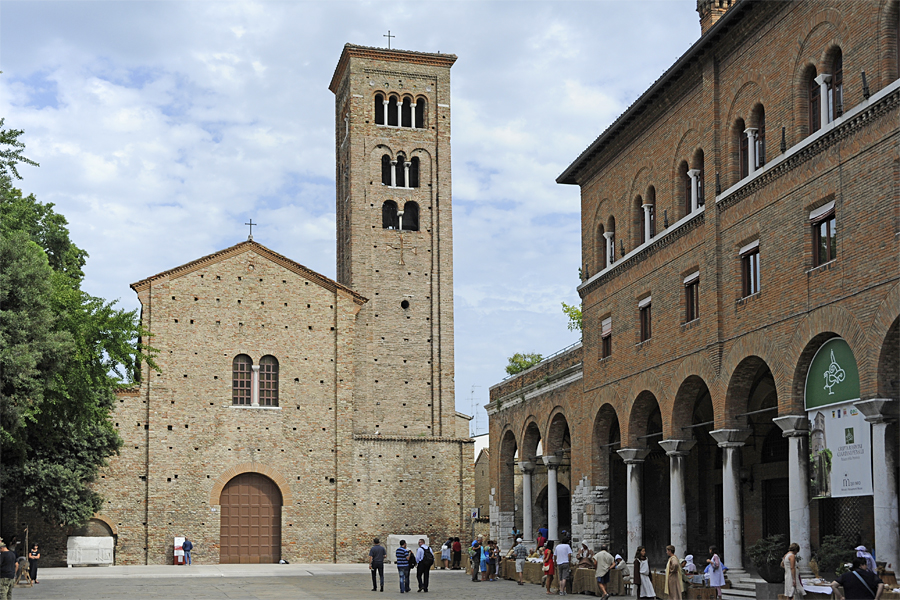 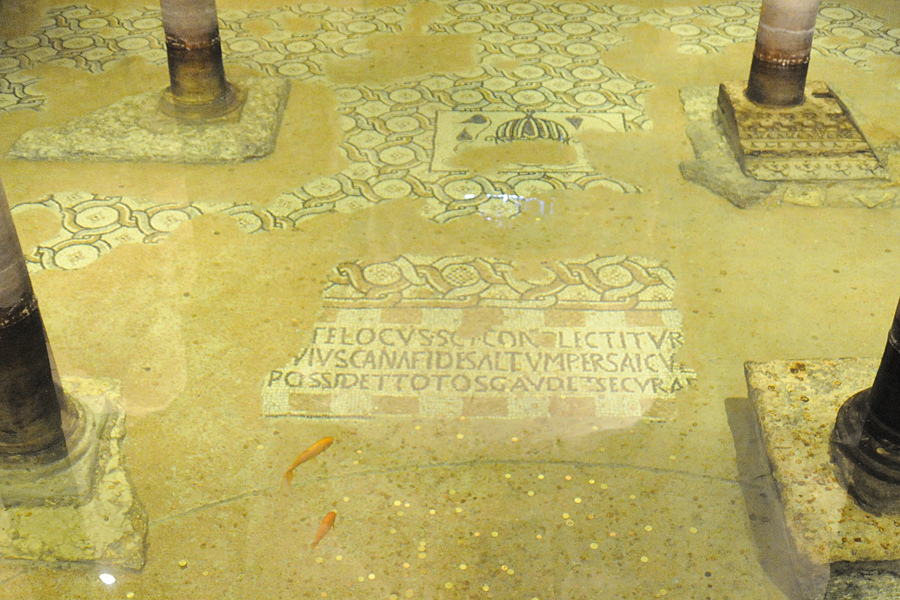 Read more about my travels in Italy and Emily-Romagna on my food and travel blog, Travel With Kat.

Learn to make mosaics in Ravenna

The Mosaic Art School, founded in 1969 in Ravenna, offers a range of classes teaching the art of mosaics and also mosaic restoration. A 5-day intensive course, taught in English, is suitable for all levels including beginners is recommended by Lonely Planet. I’d love to return to Ravenna one day to take this course and to see the UNESCO sites I missed during my first visit.

An online Floor Mosaics course (with videos in Italian and subtitles in English, French, German, and Spanish) now makes it possible to learn about this ancient art form at home.

When to visit the Ravenna Mosaics

It can be very hot and humid in Ravenna in July and August so I would avoid these months if possible, A visit in the autumn when it’s not too hot and less crowded would be my preference. November is probably the quietest and less expensive month to visit.

The Ravenna Festival, a music and opera festival, held from May to July in locations all over Ravenna, including many ancient sites. Further events are occasionally held throughout the year.

Where to eat in Ravenna

We had a great lunch at Restaurant Ca ‘de Vèn, a traditional Enoteca on Via Corrado Ricci, conveniently located near the Basilica di San Francesco in the heart of Ravenna. It’s the perfect spot for a traditional piadina lunch, pasta or risotto. The food is great but it’s the ceiling that really steals the show! 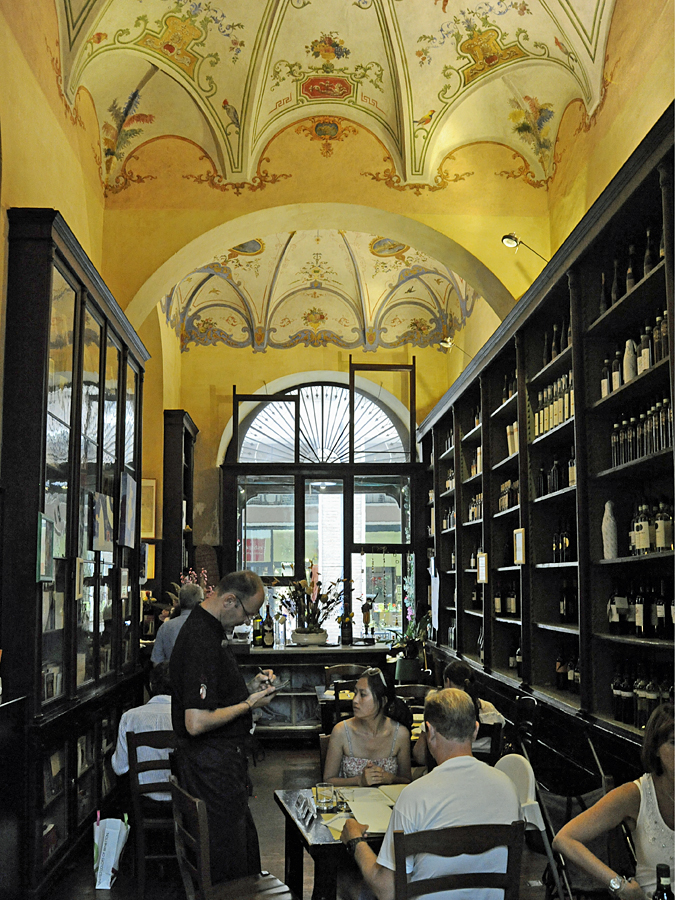 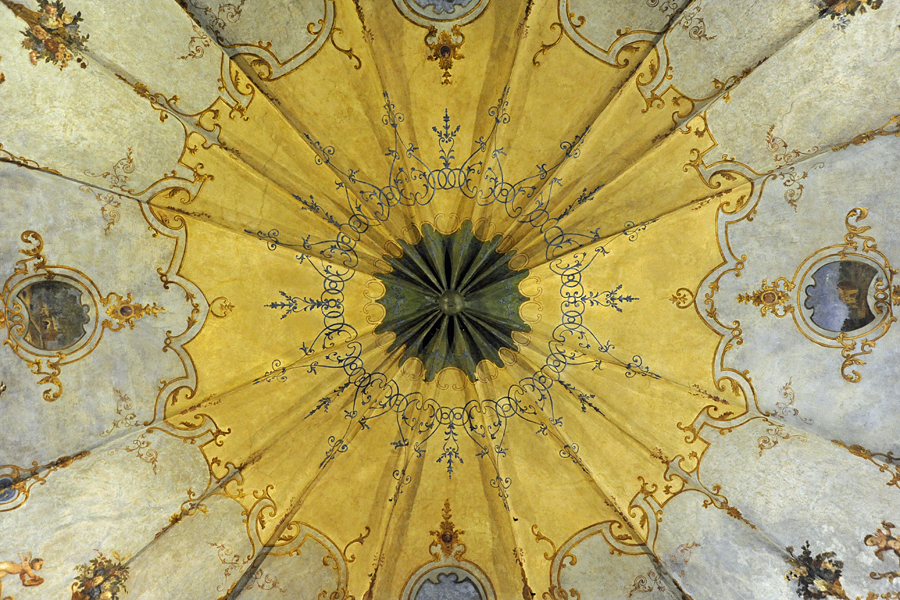 How to get to Ravenna

The nearest airport to Ravenna is Forli (FRL) from where you can take a 50-minute bus ride to Ravenna. I flew into Bologna and caught the train to Ravenna which takes just over 3 hours. Trains from Florence, Verona and Venice take about 4, 5 and 6 hours respectively.

Where to stay in Ravenna