History of Street Art in Lisboa

Lisbon or, as the Portuguese know it, Lisboa is Portugal’s vibrant capital and has a long rich history. Intertwined in its cultural heritage, and very much a part of it, is Lisbon’s colourful street art story.

Up until the 17th century, the city had a tradition of all-white buildings. But a devastating earthquake in the mid-1700s saw the beginning of a new tradition. As the city began to rebuild in 1755, locals began to add colour and decorative tiles to exterior walls and pavements.

The self-expression of local residents increased after the democratic revolution in 1974. Graffiti found its way onto city walls. Unfortunately, so did the unwanted tags and scribbles of vandals. 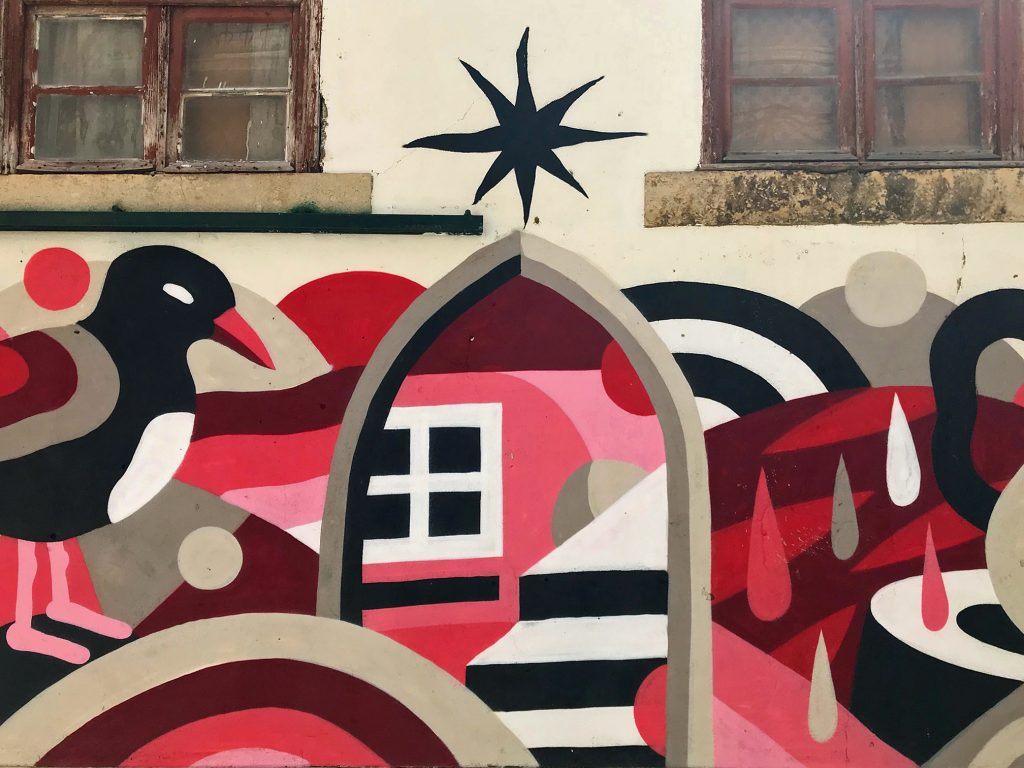 In 2009, the municipal office started Galeria de Arte Urbana (GAU). The project was aimed to discourage vandalism and promote public art. Since then, GAU has partnered with international and local artists on mural projects all around Lisbon.

The organisation monitors vacant wall spaces and encourages times for artists to create. GAU continues to open up the conversation in the artist community. They educate on Lisbon’s heritage, its preservation, and how to add value, through art, to the neighbourhoods.

Lisbon has made its way onto the global map as a street art destination. All the winding, hilly streets hold charm in the city. However, there are some areas in particular that can call themselves an open-air art exhibition.

Whether you are in Lisbon for the weekend or a week, soaking up the street art is a must. Memorable artwork is scattered throughout the city but it is important to remember that these pieces are always changing.

These are some of the city’s best locations, streets, and neighbourhoods for street art.

Mouraria is a neighbourhood bursting with colour and art. Wander down Escadinhas de São Cristóvão to discover some beautiful work. 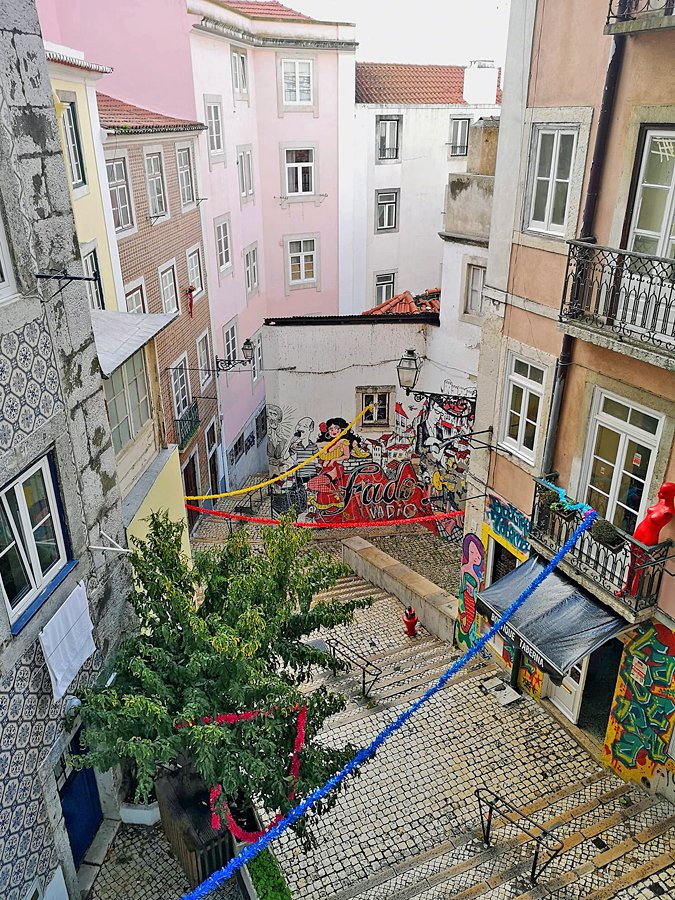 above: Escadinhas de São Cristóvão, and below: street art by Utopia 63. Photographs by Inma Gregorio, A World to Travel 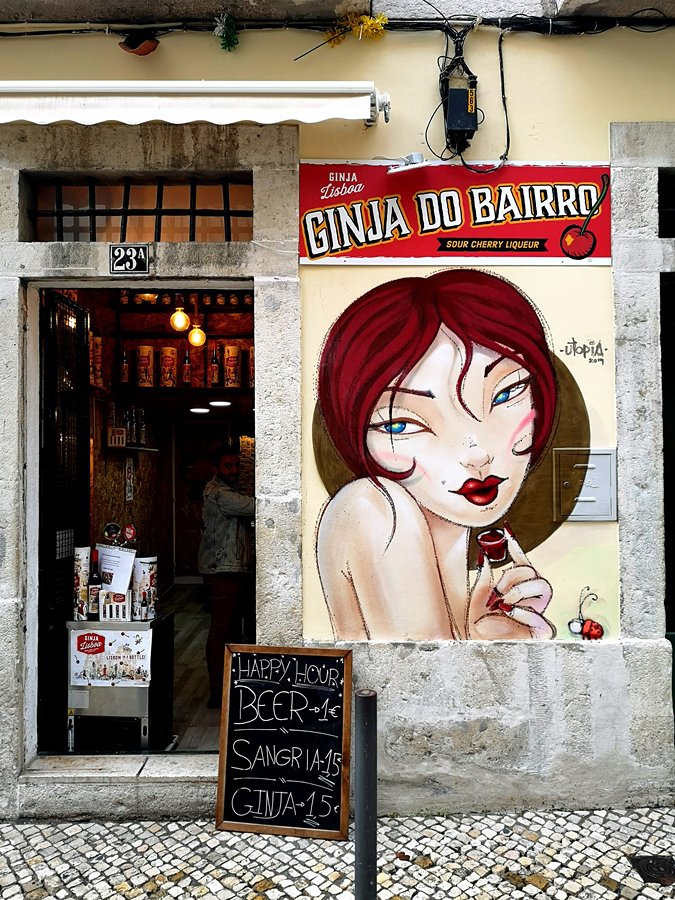 You can also make your way to a well-known car park close to the Castelo São Jorge. The parking lot displays some of the finest work from Portuguese street artists.

Located in Chiado, Calçada do Carmo is a quaint street. It is loved for its vintage stores and street art by Utopia 63, a Brazilian artist who has left his mark across from the Rossio Station.

Calçada da Glória is one of Lisbon’s steepest streets. It’s also one of the most decorated in the city. It has been promoted as the canvas for legal graffiti work.

I suggest taking the funicular to the top of the street unless you enjoy climbing up what feels like a 90-degree vertical incline. Then leisurely walk back down the street to appreciate the urban art.

The prominent Amoreiras wall is a renowned graffiti space. Dozens of graffiti artists create work on this famous wall. 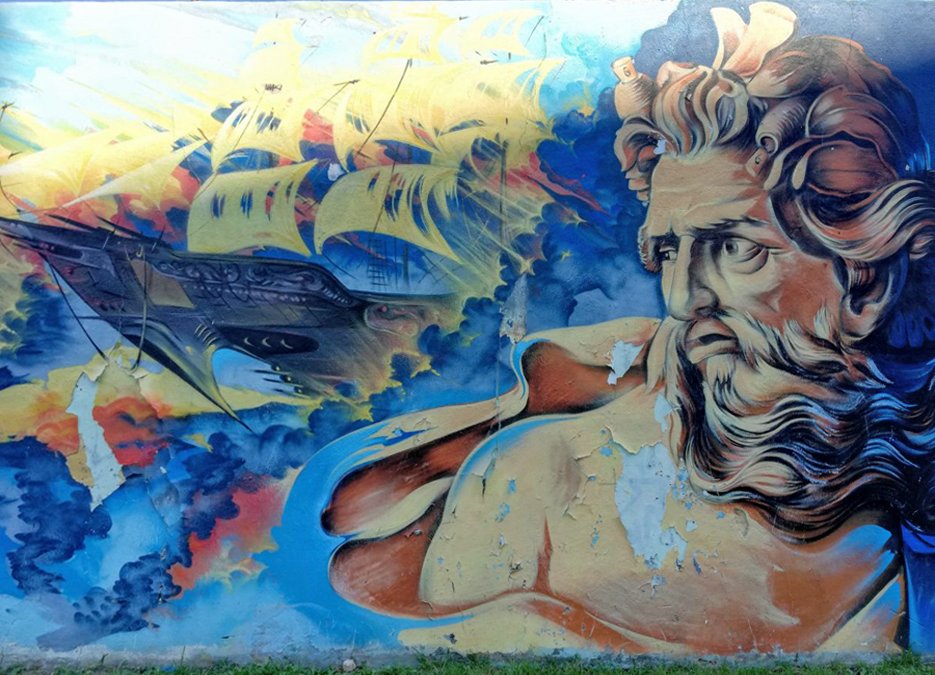 above: The wall of fame on Av. Conselheiro Fernando de Sousa. Photograph by Wendy Werneth, The Nomadic Vegan.

Get your cameras ready for this incredible street. In particular, LX Factory which is a historical industrial complex that houses works by Pedro Zamith, Corleone, and Bordalo II. There’s more on this famous artist to come. There is also an array of unique restaurants and arty retailers.

Fábrica do Braço de Prata is located in a former munitions factory. Now, it is a cultural centre that is used for art exhibitions, concerts, and lectures. It is also the most concentrated area of art by Vhils. More on Vhils to come later too.

An up and coming area in Lisbon that, until recently, few would dare to set foot in, is Quinta do Mocho. Today, however, it’s a very different story and a not to missed experience for any lovers of street art with over 100 stunning murals adorning the walls of this vibrant neighbourhood. See more street in Quinta do Mocho here, The Largest Open-Air Street Art Gallery in Europe. 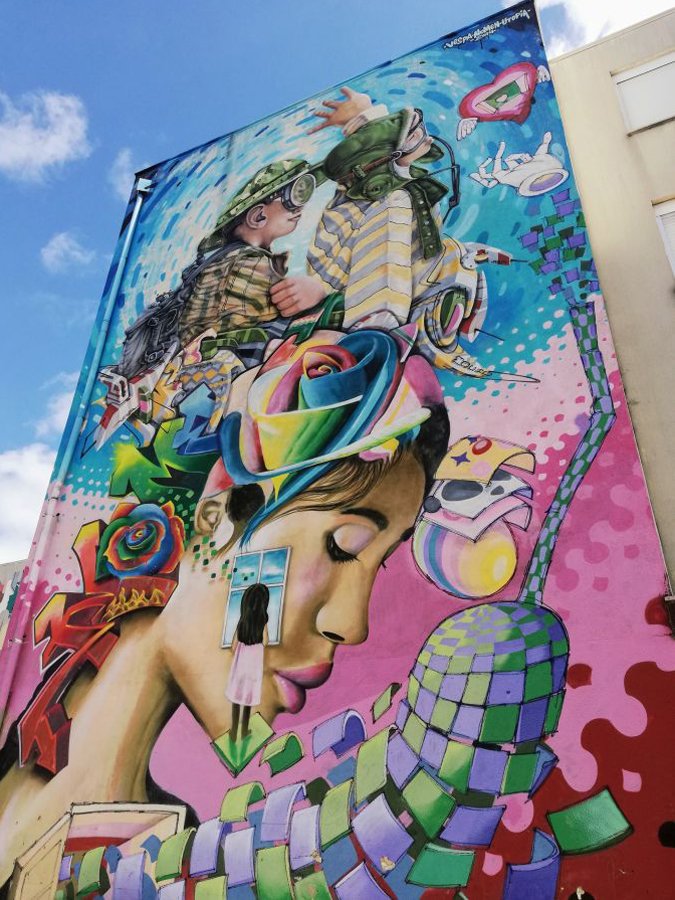 For art enthusiasts, the face and name behind the graffiti are important. Lisbon art is created by popular artists as well as lesser-known creators. These are a few of the most famous local artists whose brushes and spray cans have added to the city’s beauty.

Artur Bordalo, Bordalo II, is an iconic local name for graffiti in Lisboa. He was born in the city in 1987. His artistic routes were planted somewhere between his grandfather’s watercolours (known as ‘Real Bodalo’) and illegal graffiti. 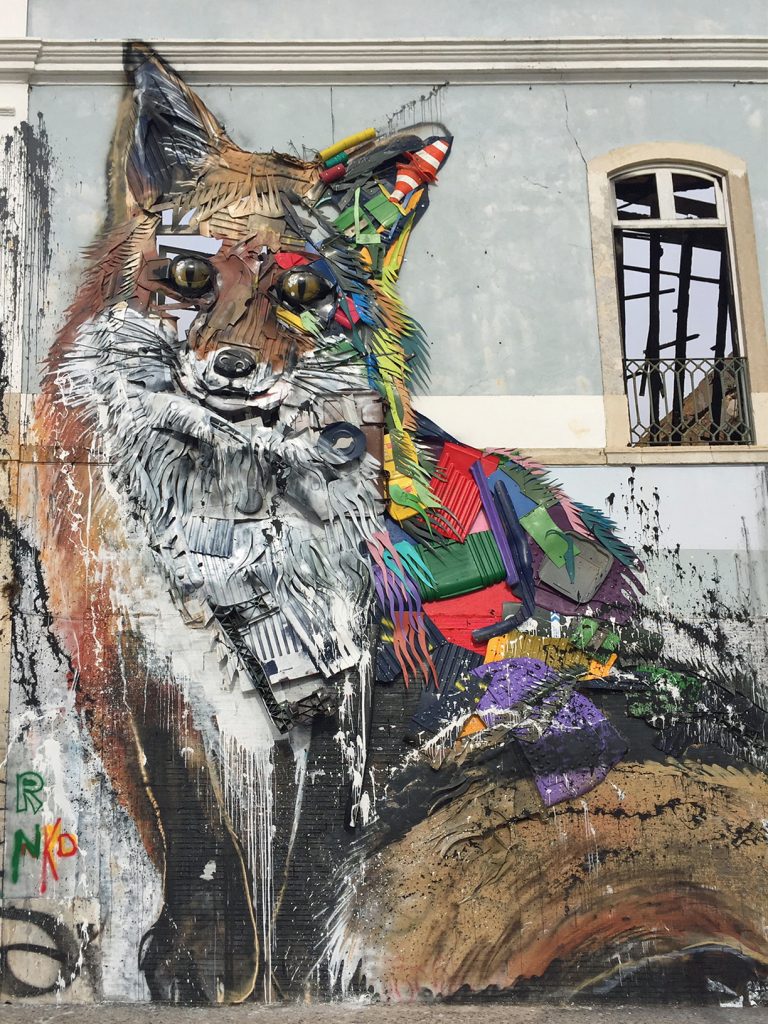 His artwork has evolved over the years and is now immersed in meaning. He is most well-known for his “Big Trash Animals” series. The artworks use large amounts of scrap metals and rubbish to create large animals on street walls. The trash is then painted over to bring colour and life to his work.

The “Big Trash Animals” series aims to bring attention to the problem of consumerism, waste production, pollution, and the devastating effects that it has on our planet. Bordalo II is depicting nature, animals in this case, with the very waste that is responsible for destroying it.

1987 was a good year for Portuguese street art. Alexandre Farto, aka Vhils, was born in the same year as Bordalo and grew up on the outskirts of the country’s capital. Vhils brings a fresh uniqueness to art in Lisbon.

His signature portraits are created by scratching, chipping, bleaching and drilling away at billboards, panels, and exterior and interior walls. Vhils’ work is impressive due to its large-scale and detail. Furthermore, appreciation can be found in the fact that his work becomes one with the architecture on which it is embedded.

Vhils’ genius is in the substrate layers that he taps into and how he then uses paint to create captivating portraits. 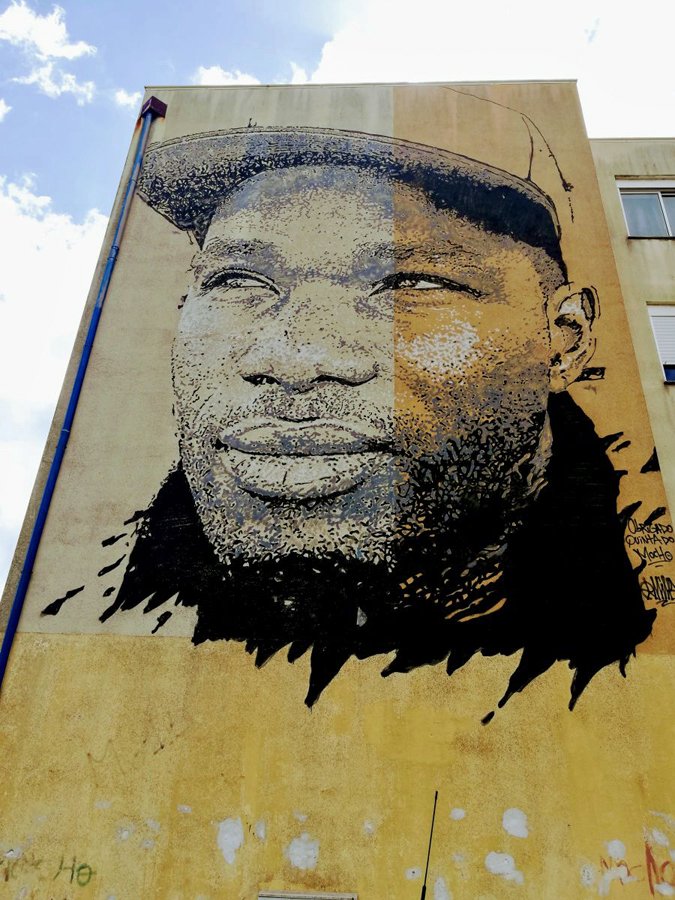 above: Street art by Vhils in Quinta do Mocho on the outskirts of Lisbon. Photograph by Wendy Werneth, The Nomadic Vegan.

Pedro Campiche, who’s pseudonym AkaCorleone, is a popular name on Lisbon’s streets. Born in the city in 1985, his colourful bold work has captured the attention of locals and foreigners alike.

Although his art is founded in graffiti, it has grown and developed into murals, sculptures, digital and anamorphic installations. He is a multidisciplinary artist who uses bright colours, graphics, and typography to form his signature style.

Tamara Alves was born in Portimãois, Portugal, in 1983 and is now based in Lisbon. She has a degree in Fine Arts and a masters in Contemporary Artistic Practices.

While Tamara is ‘classically’ trained, her inspiration is drawn from street aesthetics. Her work is multifaceted and includes design and creation work in graffiti, illustration and tattoos.

She is inspired by urban life and street art, focusing on an alternative view of the contemporary body. A lot of her work is a depiction of the female form and expanding the limits around it.

Best Tours To Check Out Street Art In Portugal

Lisbon has some of the world’s best street art.  It tops the list with Melbourne, Buenos Aires, and Brighton street art. It is inevitable that you’ll see your fair share while you’re out and about. But what is not guaranteed, is that you’ll find the best art the city has to offer.

Street Art tours are a fantastic way to make sure you see the secret gems. Local tour guides will know where the newest street art can be found. As well as the most famous pieces that have stood the test of time.

A knowledgeable guide will share the history of the city as well as street art chronicles with you. Plus, you’ll discover the best photo spots, making sure your social media feeds look fresh and your memories are captured beautifully. 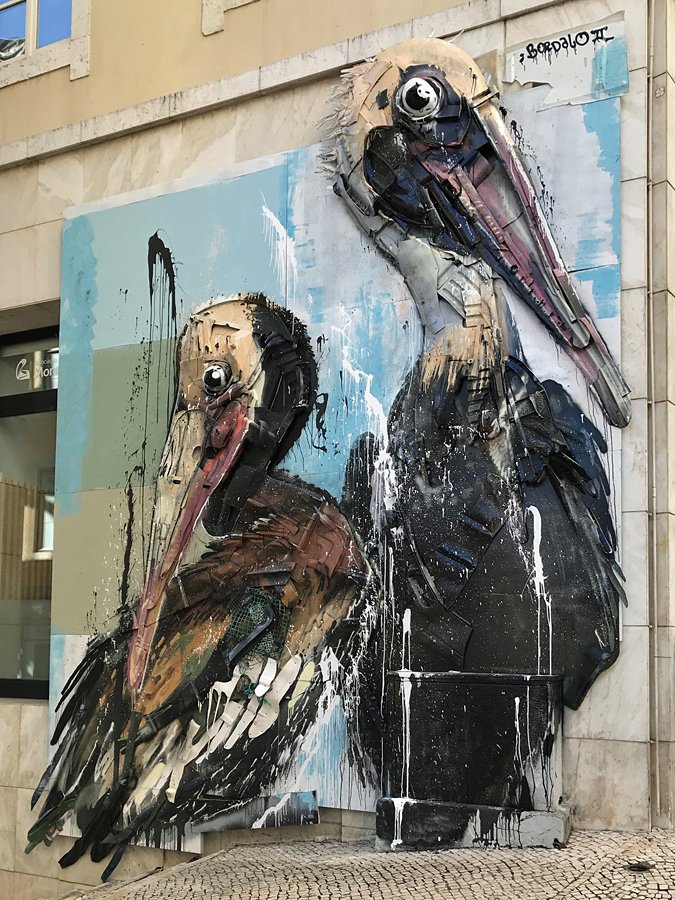 Where to stay in Lisbon

Banksy’s Kissing Coppers and other great street art in Brighton

Born and raised in South Africa, Marco moved to Lisbon over 3 years ago. He loves Europe and is on a mission to rediscover his own Portuguese heritage. He shares this passion as he explores Portugal and beyond, through his blog, Travel-Boo.