Traditional arts and crafts in the Philippines

About 500 miles off the coast of Vietnam, thousands of islands are scattered across a corner of the western Pacific Ocean. These islands are home to over 180 ethnic groups, each with its own language and traditions. Add to this the influences of numerous settlers, including the Spanish and Chinese, and the result is a rich and varied cultural heritage. Back in 2019, I enjoyed a fabulous island-hopping adventure. The memories of the beauty of the islands and their people will stay with me forever, as will the array of traditional arts and crafts I discovered in the Philippines, not least the work of woodcarver Willy Tadeo Layug.

Disclaimer: This post was brought to in association with the Philippine Department of Tourism. This post contains affiliate links. For further information please read my affiliate disclosure.

Traditional Arts and Crafts in the Philippines

Arts and crafts in the Philippines stretch back thousands of years with jade carving being amongst some of the earliest examples found dating from around 2,000 BC. While many indigenous crafts still thrive from weaving to pottery, others that I came across, such as the religious wood carving I saw in Pampanga, are relative newcomers, brought here by settlers from other counties.

The variety of arts and crafts in the Philippines is not only a result of its rich cultural melting pot, it also owes thanks to the wealth of natural materials readily available including bamboo, rattan, and coconut shells, to name but a few.

The sea too has leant its bounty to the craft industry. Capiz, for example, comes from the shell of the Placuna placenta mollusc, found in the seas around the Philippines. Fishermen harvest these edible molluscs for food and use the shells in handicrafts. Nothing is wasted!

Capiz is delicate, translucent and naturally iridescent. In the 16th century, Spanish settlers in the Philippines made stained glass windows in their churches out of capiz shells giving rise to the molluscs nickname of ‘windowpane oyster’. Today, capiz shell lampshades daggling from trees in parks and gardens is a common sight. When I spotted a capiz star at the airport just before I boarded my plane home, I couldn’t resist buying one to use as a decoration for my Chirstmas tree. A lovely reminder of my visit. 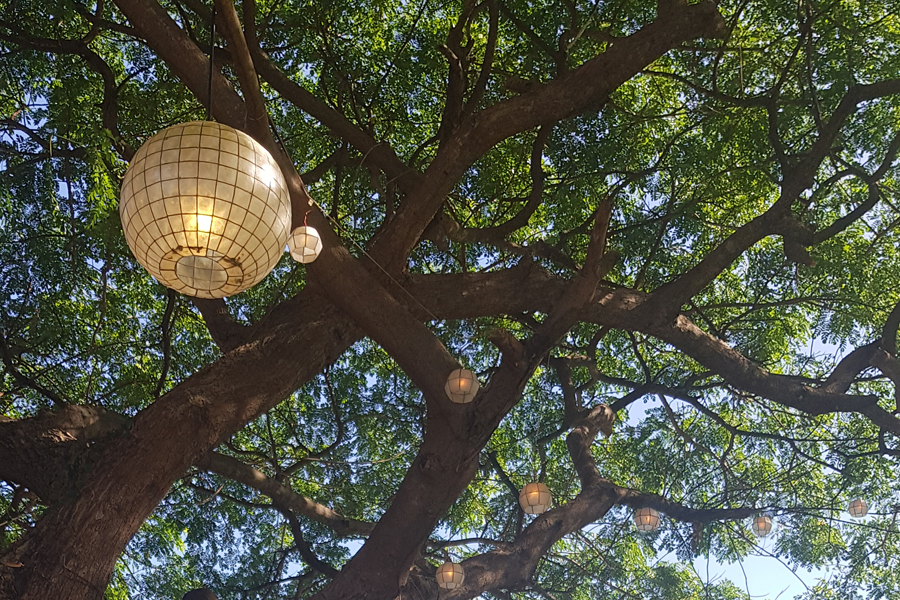 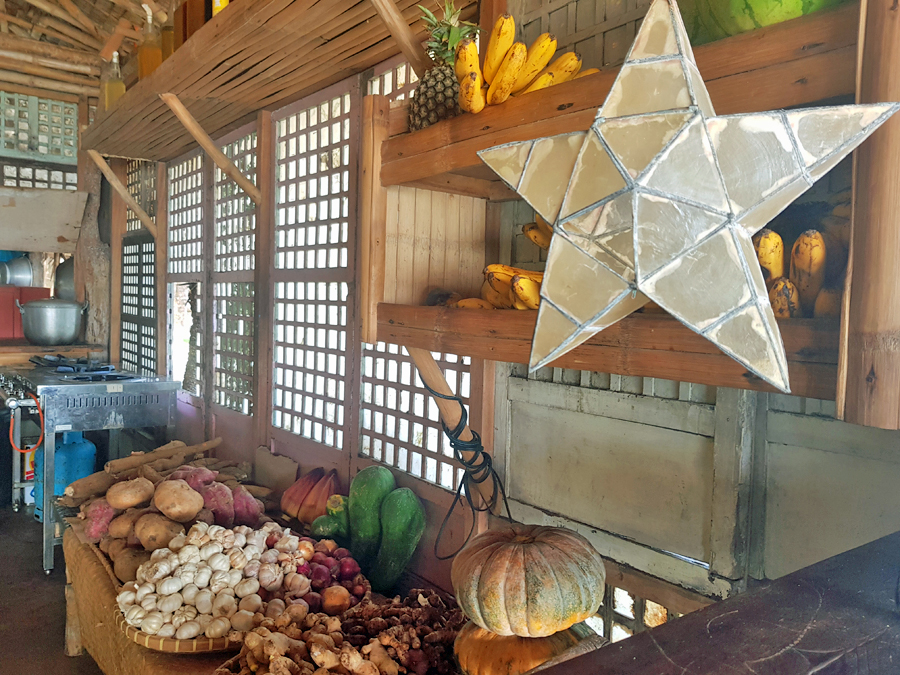 The Dream Weavers of Lake Sebu

While some crafts are fairly universal throughout the Philippines, others are unique to specific ethnic groups. Most notably, there’s a wonderful range of textiles and local costumes.

In the South of the archipelago by Lake Sebu in the province of South Cotabato, the women of the T’boli people are known as Dream Weavers. They produce a hand-woven cloth called T’nalak out of the fibres of the native plant, Abaca. Both the cloth and the women who produce it are held in high regard. Intriguingly, the patterns they weave have not been designed by the women themselves or even their forebears. The designs have been brought to them in their dreams by Fu Dalu, the spirit of the Abaca and are reproduced entirely from memory. 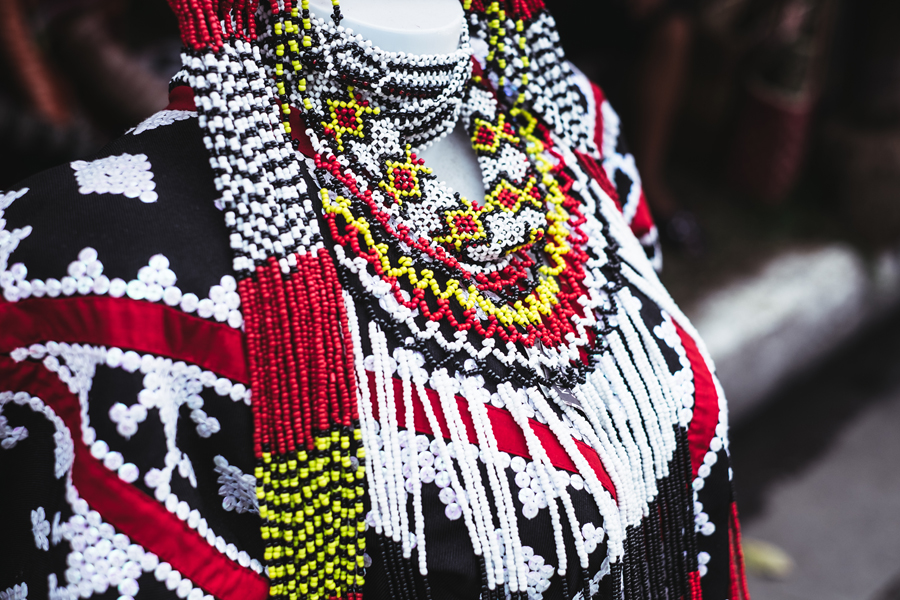 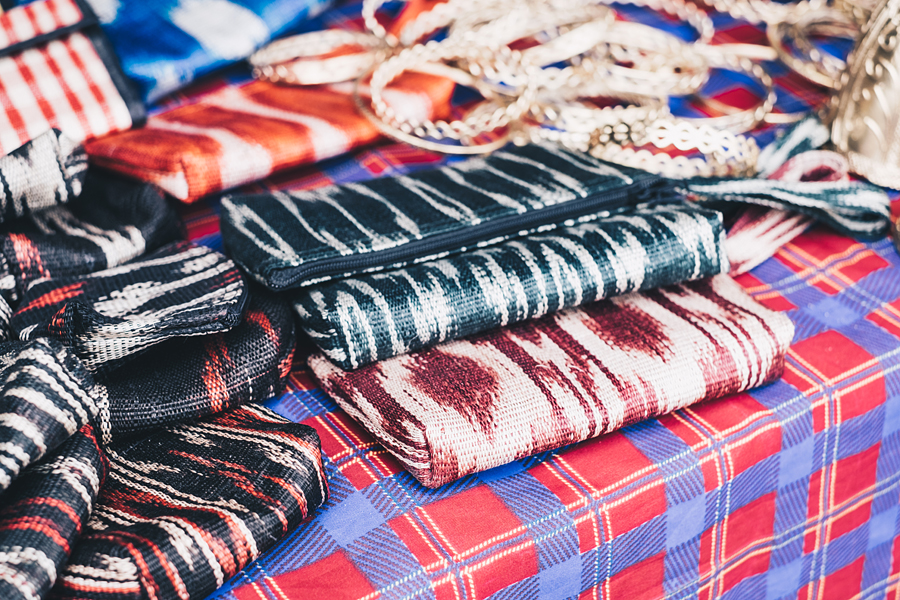 In 2017 Baguio, a vibrant, multicultural city in the mountains of Northern Luzon with local artisans specialising in woodcarving, silver craft, weaving and tattooing, was named a UNESCO Creative City of Crafts and Folk Art. While I didn’t get the chance to visit Baguio this time, I hope to on a return visit. With its multicoloured buildings, the city itself is a work of art! Wouldn’t you just love to photograph or paint this colourful scene? 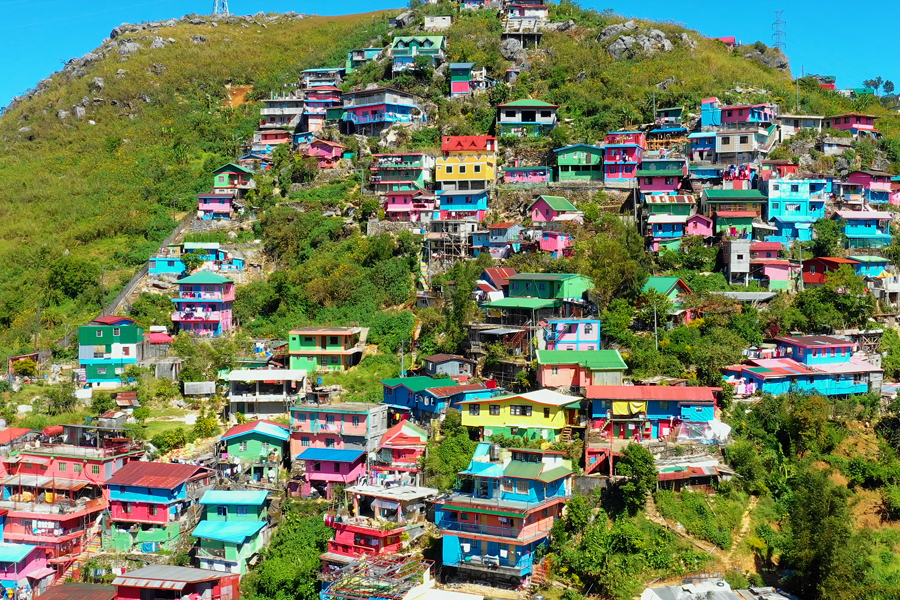 Above: the colourful houses on the outskirts of Baguio tumble down the hillside (Fly_and_Drive/Shutterstock). Below: Elders wearing traditional cloth (Pixabay). 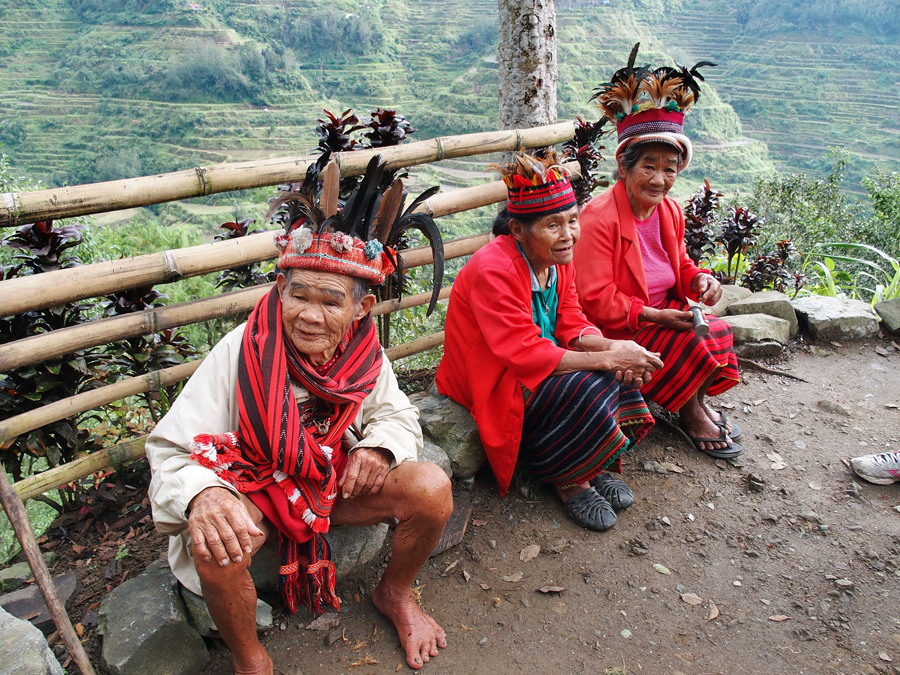 The sunlight streams through an open doorway in a quiet street in the barangay of Sta. Ursula, the artistic centre of the Betis in Guagua in the Filipino province of Pampanga. Having left Manila, our flight to one of the smaller islands has been delayed and I’ve taken the opportunity to meet and see the work of sculptor Wilfredo Tadeo Layug. 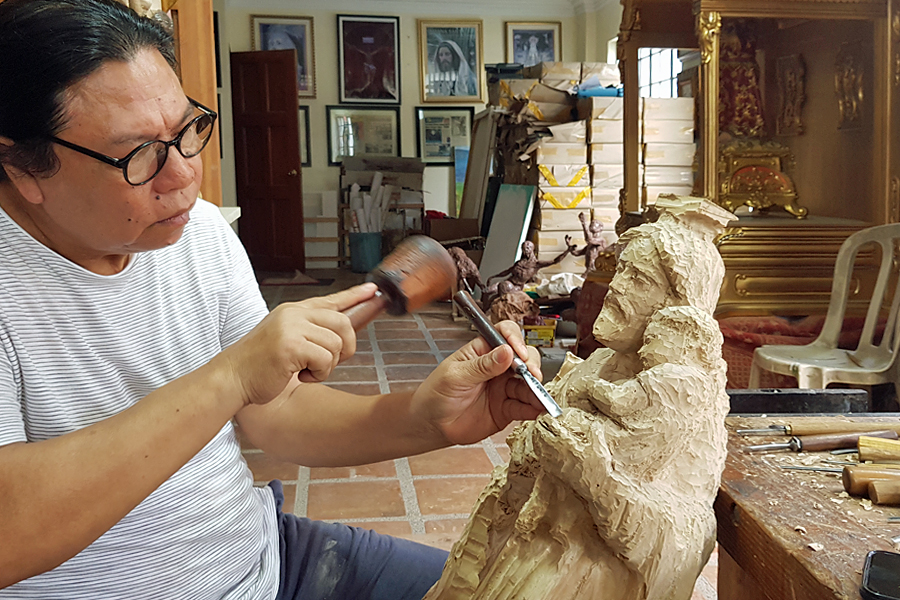 Above: Artisan Layug in his workshop in Betis, Guagua, Pampanga.

As I approach the workshop, I hear the tap, tap, tap of a mallet hitting a chisel. Inside, Layug seems unaware of my presence as he focuses on his work while chiselling away at a carving of a saint holding a young child. I’m surrounded by saintly figures but two stunningly lifelike sculptures, in particular, catch my eye – a bust of Mother Teresa and a secular pro-peace artwork. 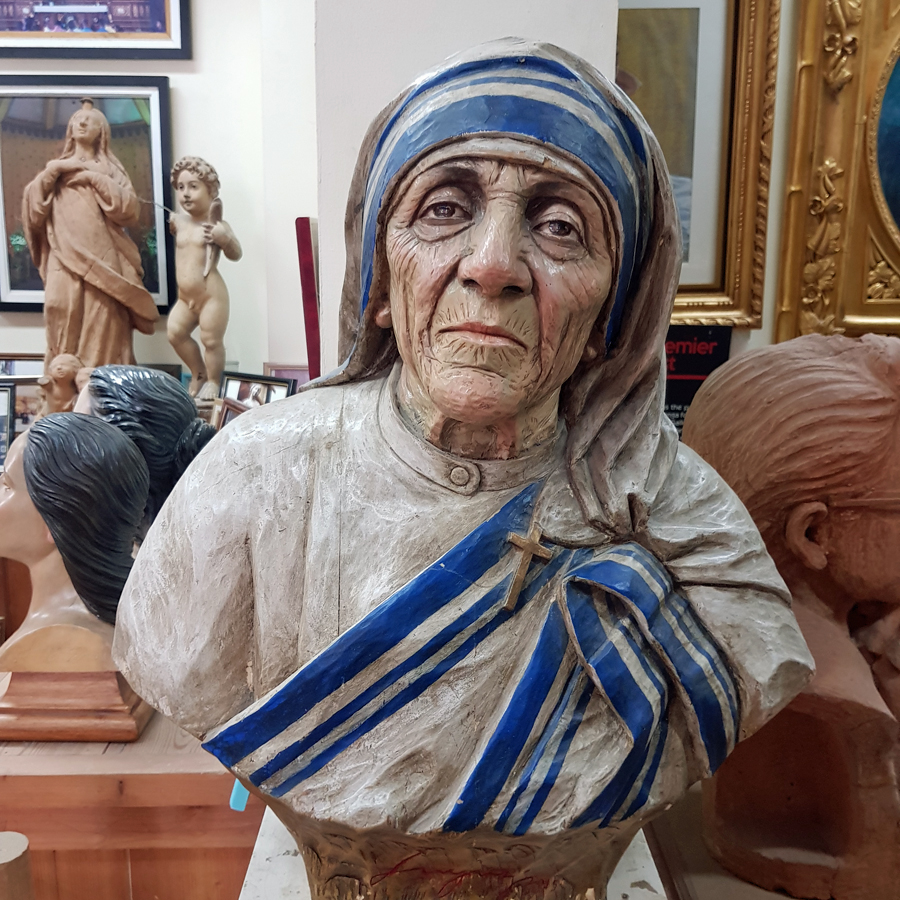 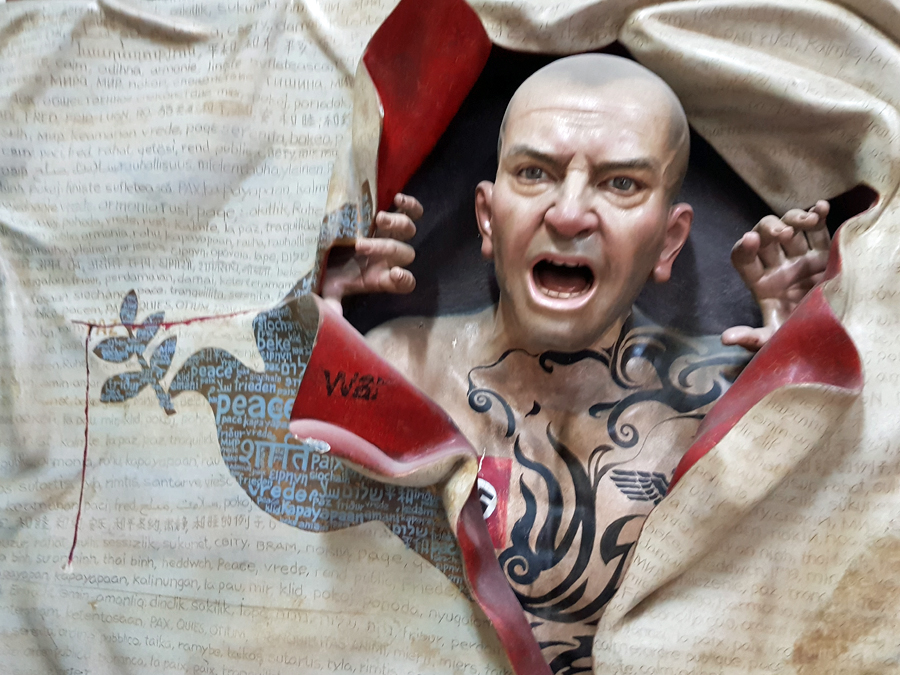 My guide introduces me to Layug and his son, Josef, a highly-skilled sculptor in his own right.

Wood carving, in this region of Guagua, dates back many years having been passed down through the generations for over five centuries. The first woodcarvers in the town are believed to have been Chinese immigrants. They were commissioned to create wooden furnishings for the local churches by the Spanish friars. The Filipinos became their apprentices. Over the years different cultures have influenced the craft of wood carving in Betis, and the area became famous for both its wood furniture as well as the stunning statues.

Like many Kapampangans, Layug comes from a devout Roman Catholic family. Born on 5th December 1959 in Betis, his father was a boat maker. Layug grew up in the barangay of Santa Ursula, the artistic centre of Betis in Guagua, Pampanga. He was surrounded by painters and sculptures of Spanish influenced wood and ivory religious statues. As a teenager, he became the apprentice of both Apung Juan and Pedro Datu. His first big break came at the age of just 17 when he was commissioned to make a bas relief of a replica of Santiago Matamoros at the gate of Fort Santiago in Manila.

Thanks to the patronage of the former Pampanga Governor Estelito Mendoza, Layug completed his degree in fine art and architecture at the University of Santo Tomas, Manila. He then travelled extensively around Europe visiting churches, spending three summers in Seville, Spain, studying estofado, a finishing technique in which gold leaf is applied to the surface of a wooden carving of a saint (known as a Santo) before it is painted. The paint is then scratched away to reveal the gold beneath. 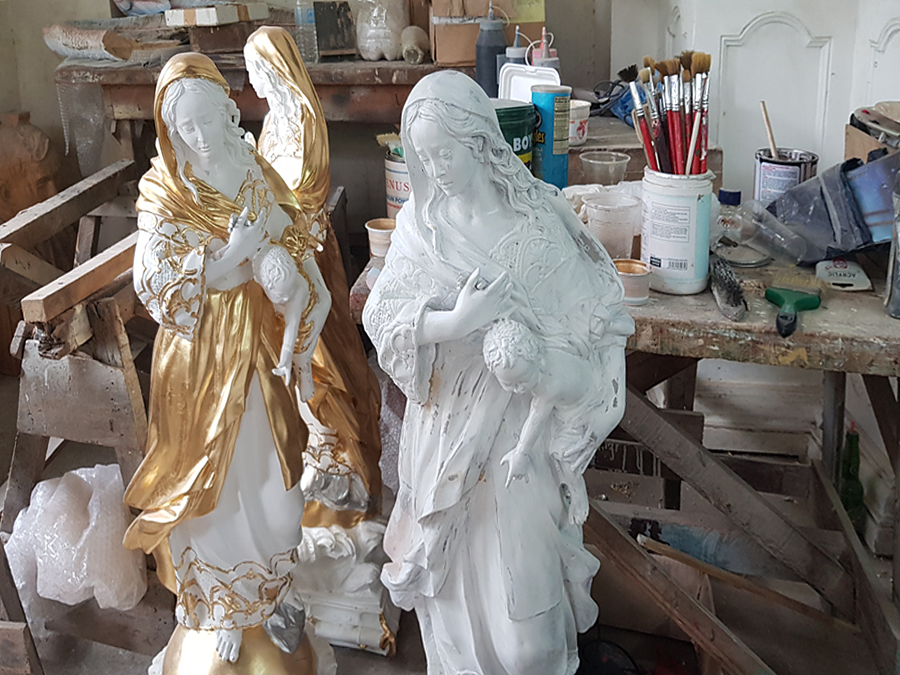 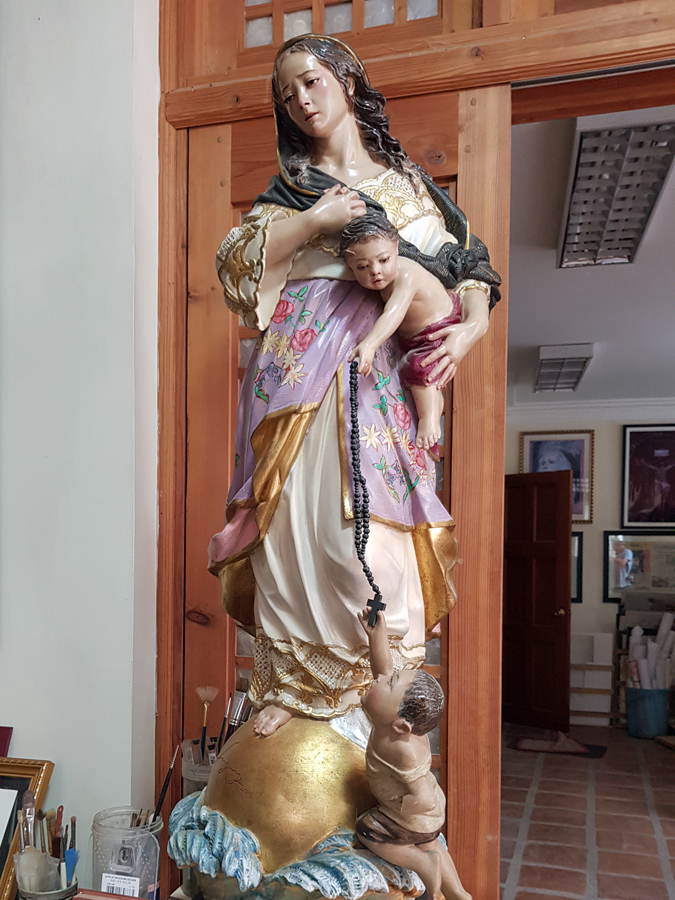 Above: Santo statues carved by Layug. Below: In the neighbouring workshop more craftspeople are at work sanding
one of the statues in preparation for painting. 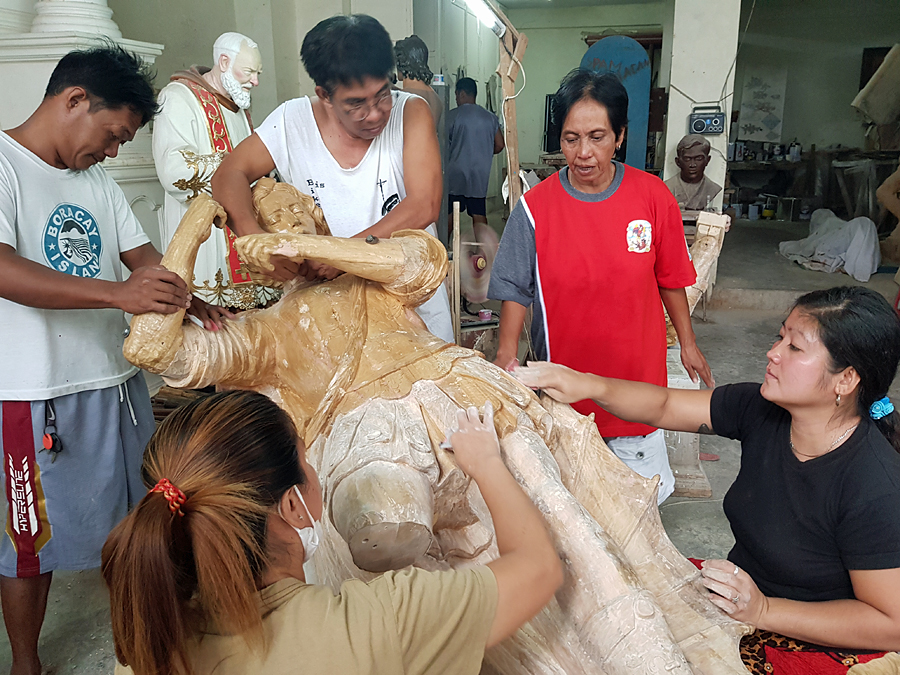 Over the years Layug has introduced new techniques to the woodcarvers of Betis and his sculptures can be found in many magnificent churches around the Philippines as well as overseas. With a reputation of being the finest ecclesiastical artist in the country, Layug is the recipient of many awards, including the highest merit of the Catholic Church, the Pro Ecclesia et Pontifice.

Layug taps away. And I head off to the airport, delighted for once that my flight has been delayed long enough to pop by Betis and catch a glimpse of this great artisan at work.

Contemporary Art in the Philippines

The Ateneo Art Gallery opened in 1960, as a museum of Philippine modern art. is It’s located in the Areté building of Ateneo de Manila University. While you may not be able to visit in person at present, why not take a virtual tour of the Ateneo Art Gallery.

Contemporary art lovers shouldn’t miss a visit to the Pintô Art Museum in the historic city of Antipolo near Manila.  Founded in 2010, this striking art gallery was designed to publicly exhibit the art collection of Filipino neurologist and patron of the arts, Dr. Joven Cuanang. The name of the museum literally translated means door in Filipino and symbolises the connection created by art between different and communities both domestically and internationally.

Filipino Art in New York and beyond

In 2017, the Pintô Art Museum in the Philippines founded a new initiative, based in New York, promoting contemporary Filipino artists on an international stage.  Visit their website for news and updates regarding global exhibitions, Pintô.

Where to buy arts and crafts in the Philippines

There are many markets throughout the Philippines where you can find local handicrafts and souvenirs. One of the best is at Quiapo in Manila where you can buy items such as capiz lampshades, bamboo wind chimes and a range of traditional crafts from the provinces at great prices. Even at smaller markets, such as the Sunday market at Legazpi in Manila, it’s worth keeping an eye out for handmade crafts.

Below: Bamboo and rattan bags and baskets at Legazpi Sunday Market 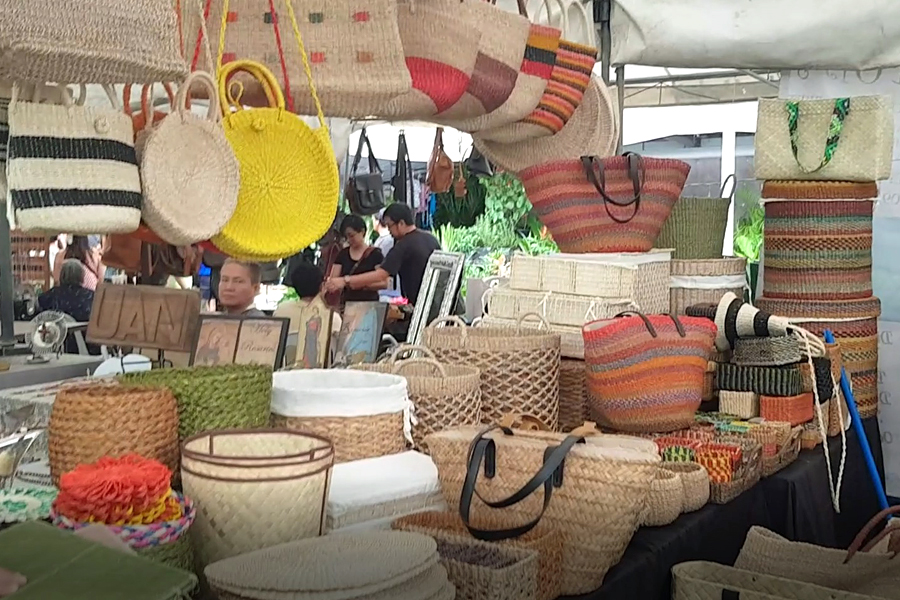 For something a little more exclusive, the luxury jewellery brand Jewelmer, founded in 1979 by a French pearl farmer and a Filipino entrepreneur, specialises in South Sea pearls. Jewelmer now has several shops across the Philippines and you can also purchase items online.

For something more quirky, visit Escolta Street Flea Market in Manila to see upcycled antiques creatively given a new lease of life.

With such vibrant traditional and contemporary art scenes in the Philippines, it comes as no surprise that on occasion the two collide.

One such example is the range of beautiful accessories by Agsam Fern. When artist Gina Nebrida Ty stumbled across the art of weaving agsam, a local type of fern, during a visit to her husband’s hometown in Surigao del Sur, in the Philippines she was soon convinced that the craft was not reaching its full potential. She collaborated with the weavers to create unique designs combining agsam with other natural materials including pearls and metalwork from elsewhere in the archipelago. This striking collection of bags and jewellery has opened up new markets both domestically and internationally, with the potential to provide a sustainable income to a great many local artisans.

Another exciting blend of traditional craft and contemporary design is the collaboration of a fashion designer with textile artisans throughout the Philippines most notably the town of Lumban near Manila, where over 60% of the population are involved in the embroidery industry. For centuries ancient traditions have been passed down through the generations there. Today, together with similar artisans from across the Philippines, their work is a source of inspiration for fashion designer Lenora Cabili. By incorporating ancient techniques of weaving and embroidery by these indigenous Filipino artisans into her contemporary fashion designs, Cabili is giving a new lease of life to their ancient traditions.

This is just a glimpse of the wide variety of arts and crafts made in the Philippines. I hope to return one day to meet more artists and craftspeople, and to gain a greater understanding of the range of work and the cultures behind them.