If you’ve ever travelled to the Middle East or Morroco or visited Moorish palaces like the Alhambra in southern Spain, you will no doubt have been mesmerised by Arabic geometric art. Stunning tilework adorn the facades and interiors of mosques, forts and many other majestic buildings with similar designs appearing in exquisite ancient Islamic manuscripts. One of the easiest of these Arabic geometric patterns to draw is the star and cross pattern. It features an eight-pointed star or octagram as it is called in geomtery.

The star can be used on its own, maybe to frame some calligraphy or a floriated Arabesque design. Alternatively, the star can be drawn repeatedly to form what is known as a tessellated pattern. It is then that the cross can also be seen and the overall design is known as the Star and Cross pattern.

Search for any of these hashtags on Instagram for #islamicillumination or #islamicgeometry and you’ll soon find a wonderful array of artwork from current artists around the world incorporating geometric, calligraphic and biomorphic (intertwined stems, leaves and flowers) designs. These are three important elements found in Islamic art.

When I started studying Arabic geomtery, I was blown away by the simplicity of the tools needed to recreate these patterns juxtaposed against the complexity of the geometry for some of the designs. You don’t need a ruler or a protractor, merely a compass and a straight edge.

The Star and Cross Pattern


One of the simpler patterns to recreate is the star and cross design also known as The Breath of the Compassionate. It’s found throughout the Islamic world and beyond. 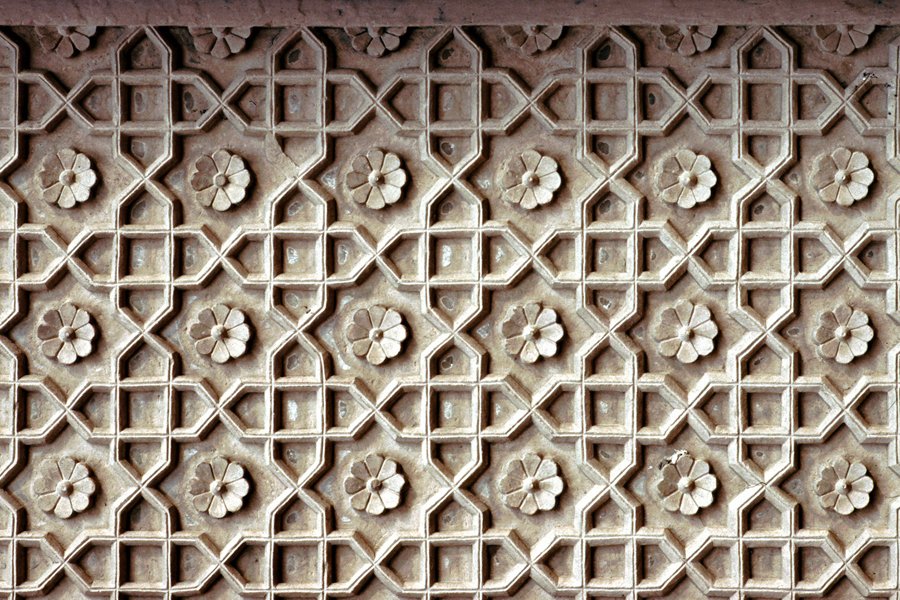 This Mughal carved masonry and stone relief is dated 1550 AD/CE (955 AH in the Islamic Calendar). 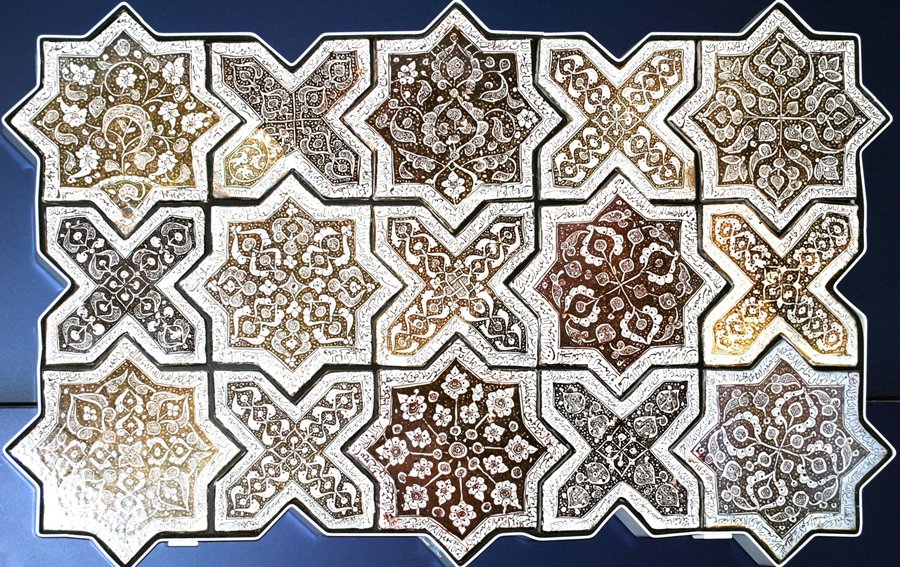 These tiles are dated 1215 AD/CE (612 AH). They’re the traditional star and cross pattern, however, they have been arranged at a 45-degree angle from the pattern we will draw. Tilt your head to one side to look at it and you should see what I mean!

You’ll also find the Star and Cross pattern on the ceiling of the nave in The Palatine Chapel (Cappella Palatina), in Palermo, Sicily. This 12th-century Christian chapel is a mixture of Byzantine, Norman and Fatimid architectural styles reflecting the different cultural influences found in Sicily at that time. 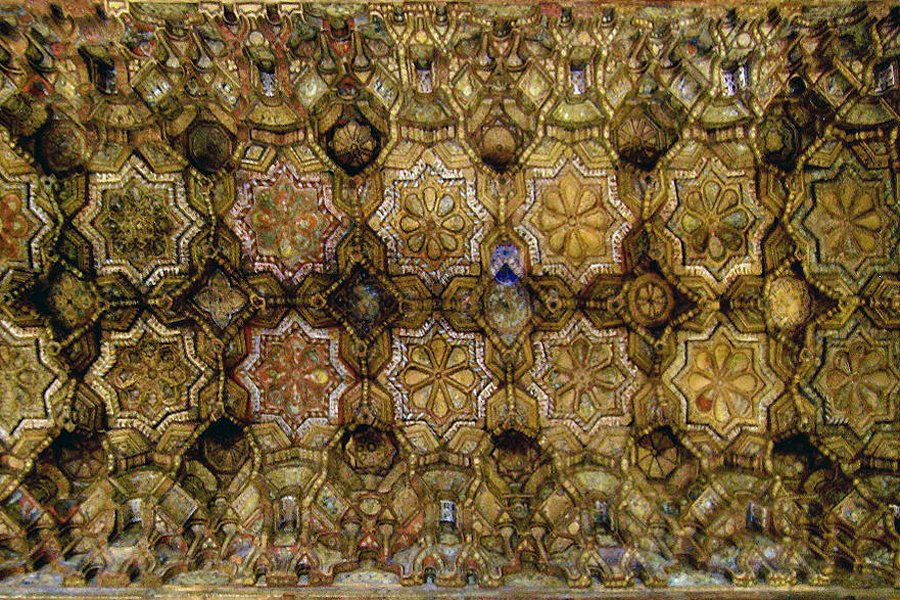 Here’s my modern take on this pattern painted in watercolours and using masking gum rather than ink to draw the outlines. 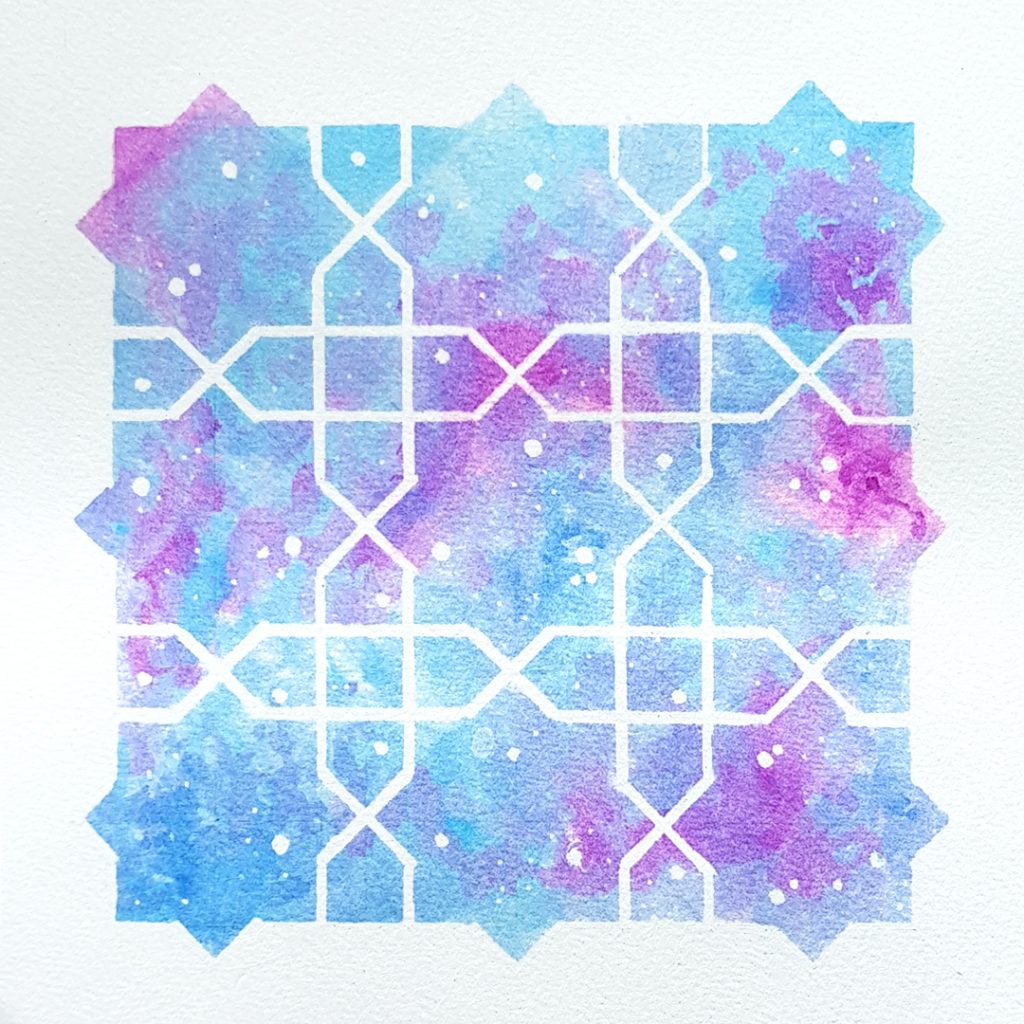 How to draw the eight-pointed star (traditional method)

The star and cross is one of the simplest geometric designs I’ve come across and if you are new to Islamic geometric and illumination, it’s a great place to start. We’ll start with the eight-pointed star, known as an octagram in geometry or khatam in Islamic geometry.

In traditional Arabic geometric art, the designs are drawn using only a straight edge and a compass. There’s something very satisfying and really quite magical about drawing patterns in this way. It’s surprisingly accurate too!

1. To start. draw a circle with your compass followed by a horizontal line through the centre of your circle. No measuring is needed but make sure your circle doesn’t fill your paper. You will need a reasonable space around it as you’ll see if you scroll down a few images first. 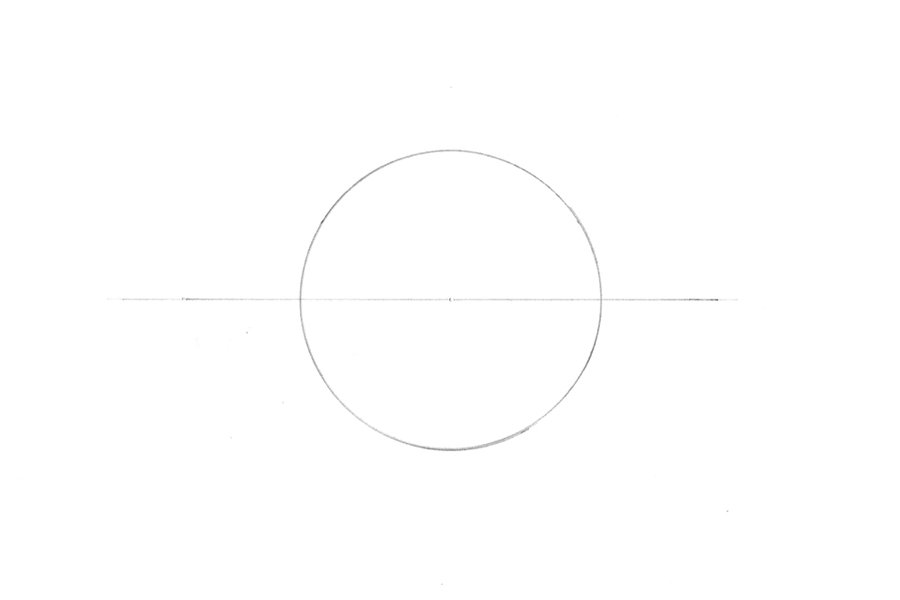 2. Using the exact same radius as your original circle draw with the point of your compass in the red points below, and draw two more semi-circles. 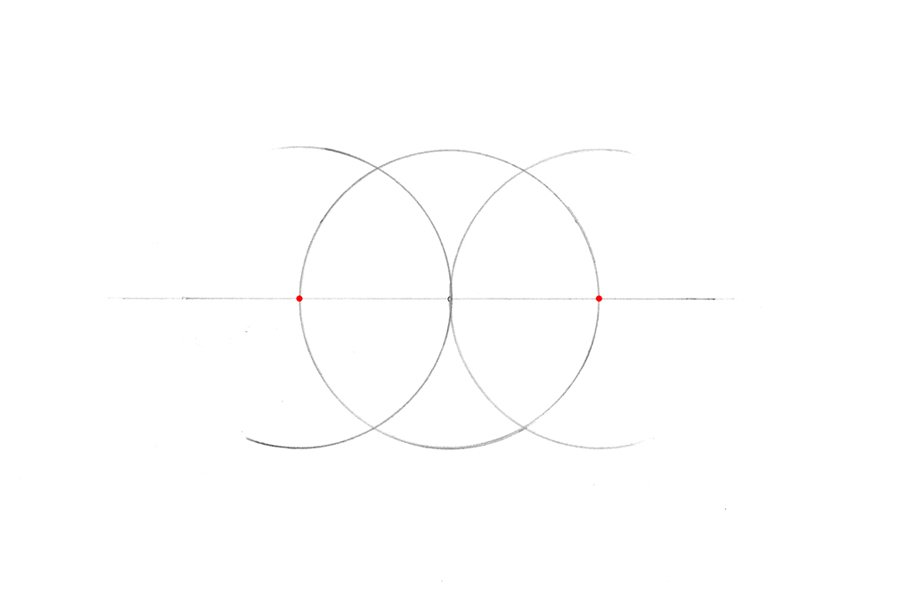 3. Keeping with the same radius, place the point of your compass at the intersection shown with a red dot and draw the arc also shown in red below. 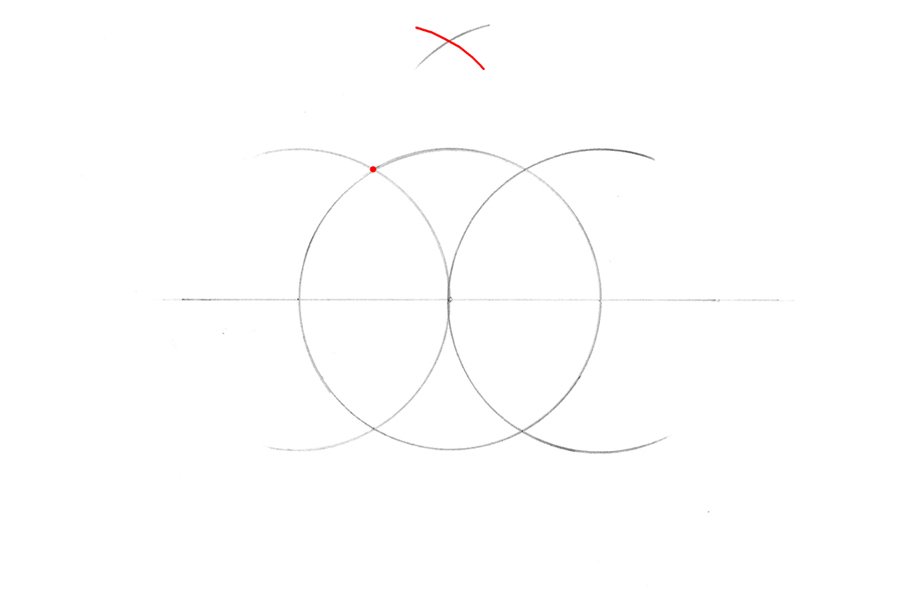 4. Repeat on the righthand side. 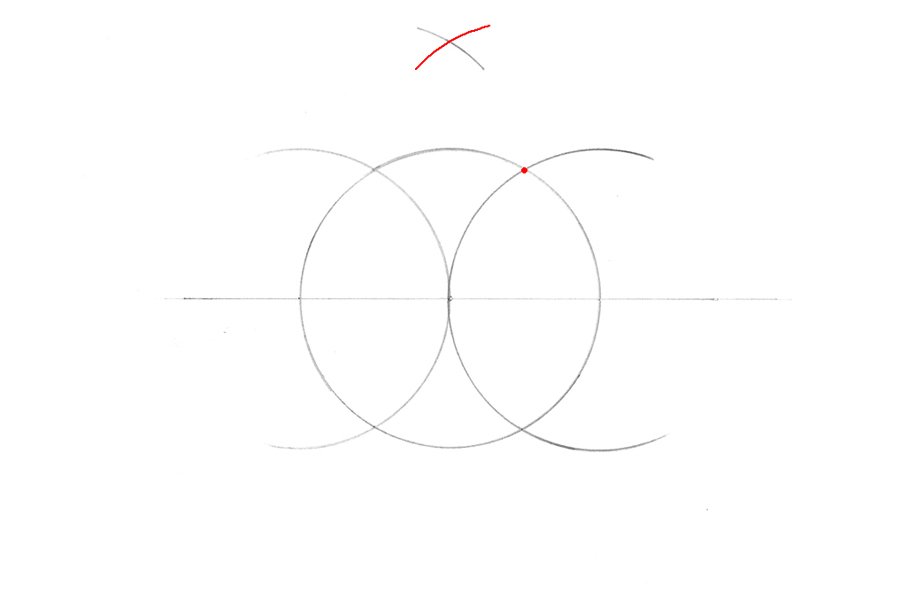 5. Draw the same pair of arcs below your circle. 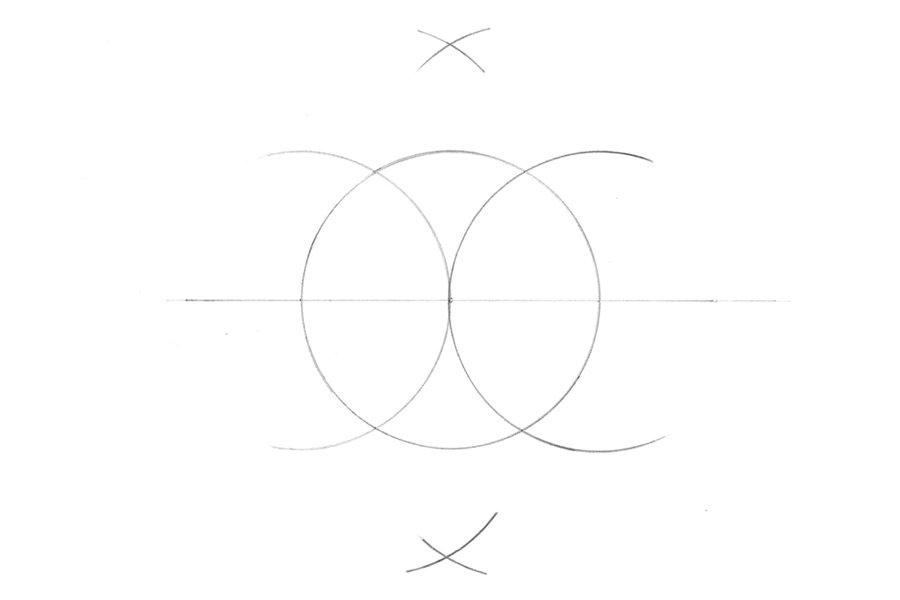 6. Draw a line connecting the points where the two pairs of arcs intersect.

7. Using the red points below to place the point of your compass draw two more semi-circles as seen below. 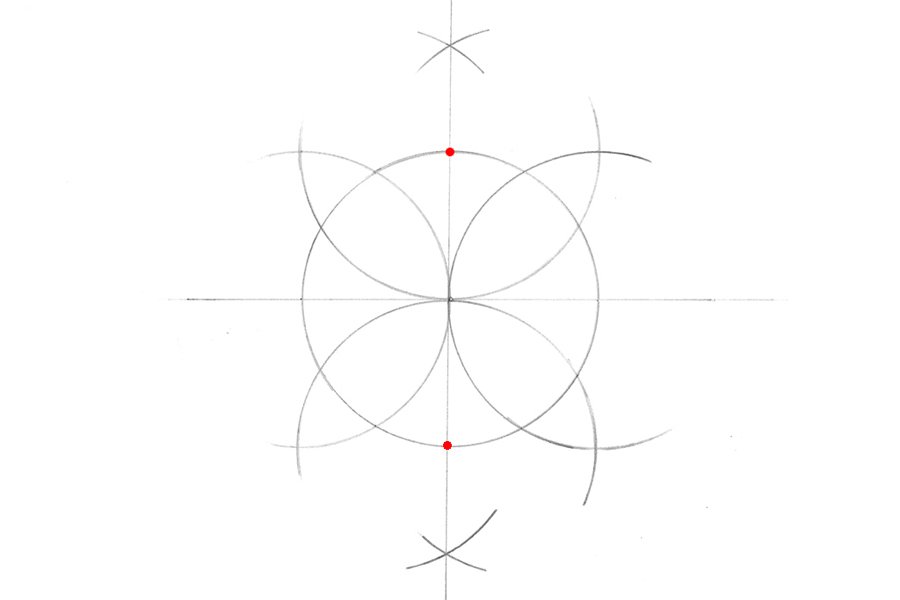 8. Draw a square inside your circle as shown here. A square drawn in this orientation is known as a static square. 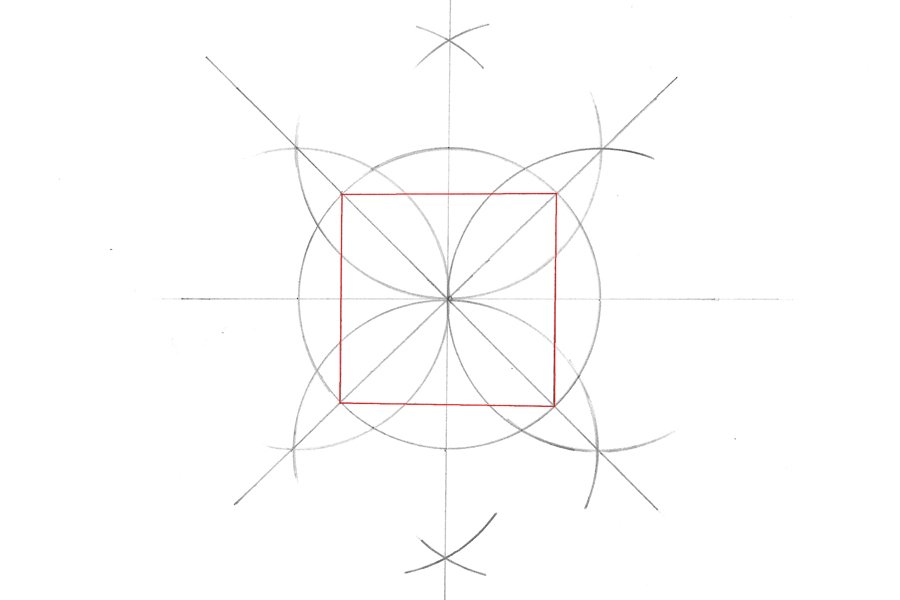 9. Now draw a second square at 45 degrees to the first. This is known as a dynamic square. 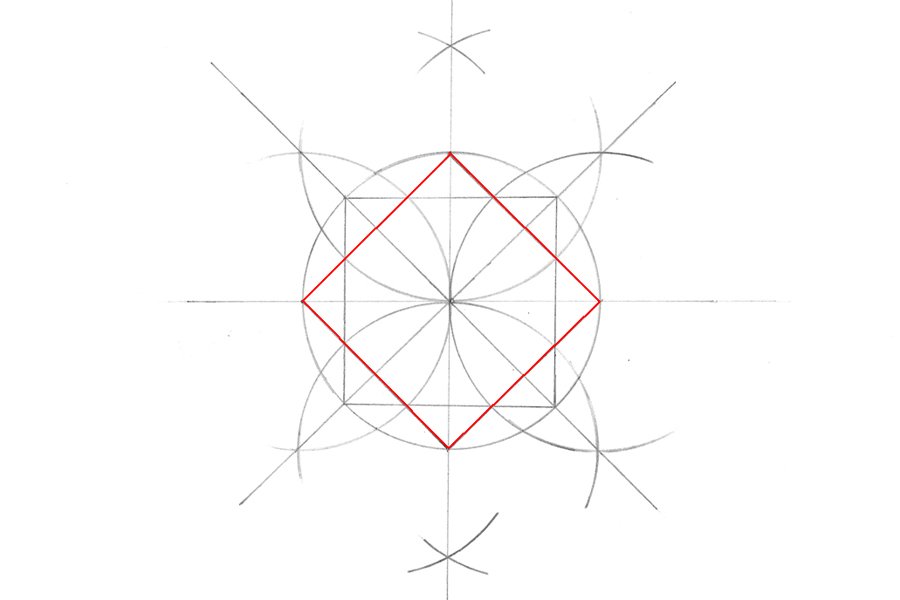 10. Now using an ink pen or coloured pencil and a straight edge, trace over the lines to draw an 8 pointed star. 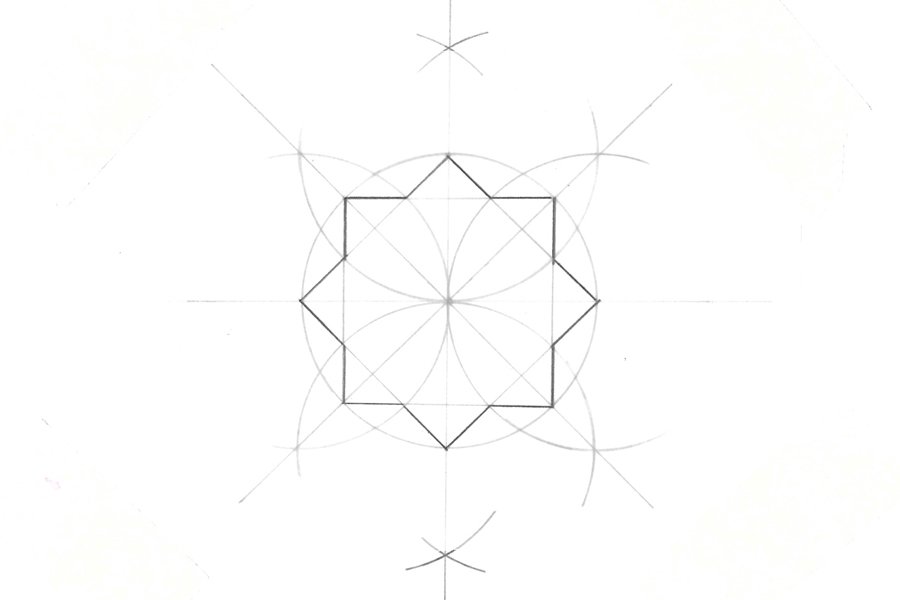 How to draw the eight-pointed star (alternative method)

Traditionally, only a compass and straight edge were used but now I’m going to show you how to draw it using a ruler, protractor and compass. If you know both methods, then you can choose for yourself which one you prefer.

1. Draw a square (using your ruler and protractor). 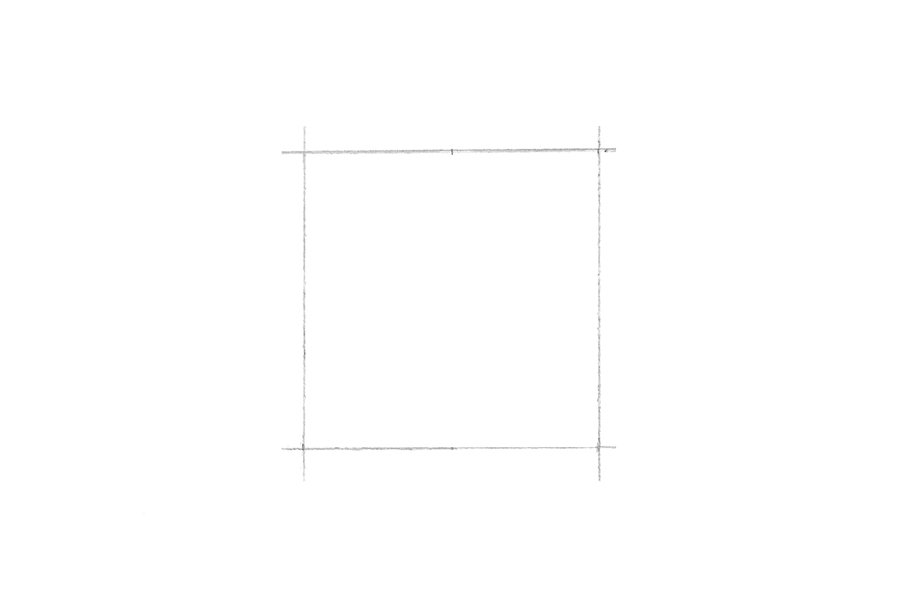 2. Now divide this to form four squares within your original square. 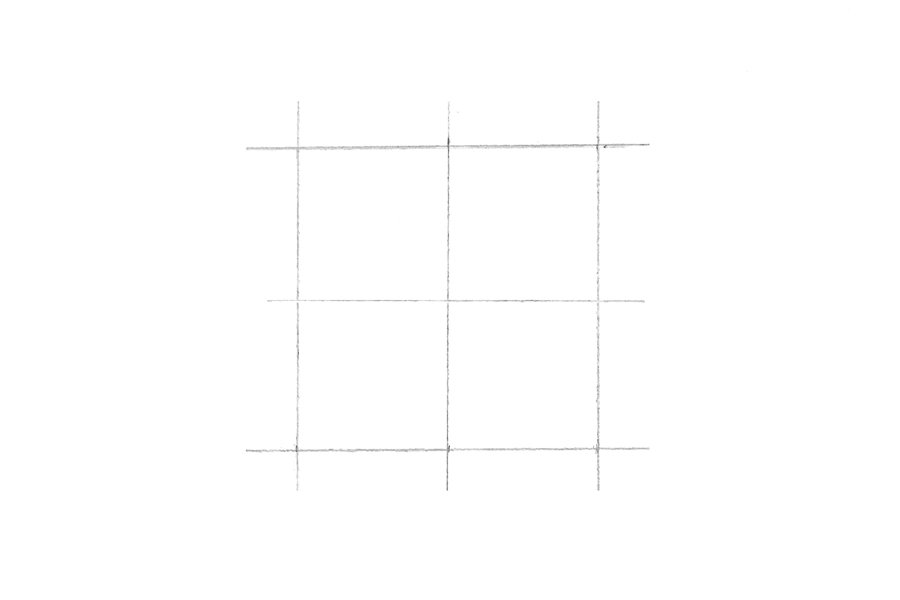 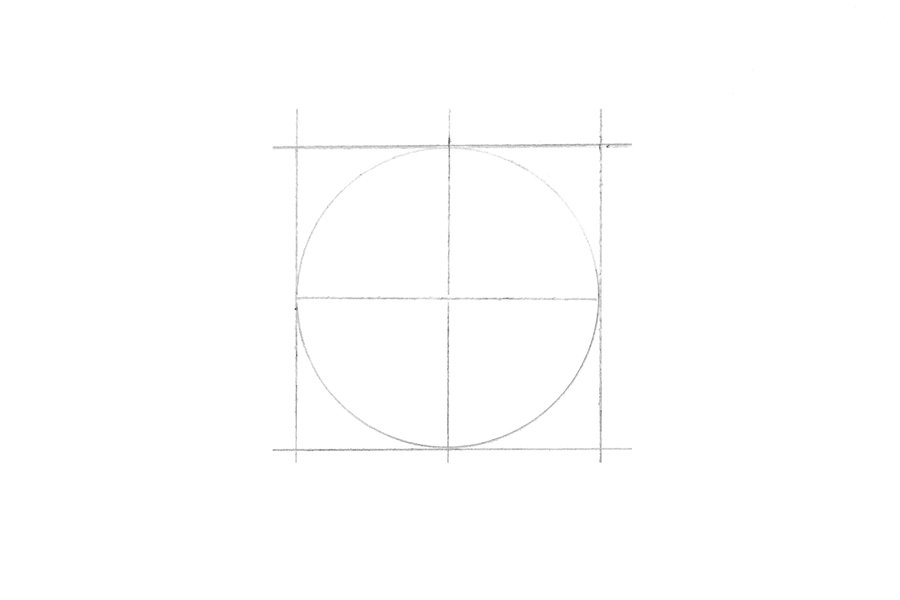 4. Now draw in the diagonal lines connecting the corners of your original square. 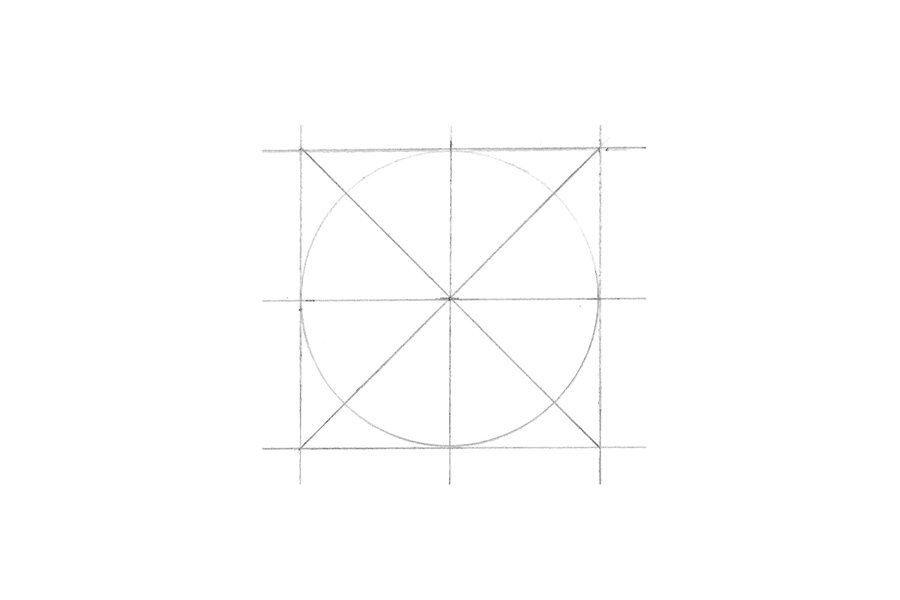 5. Connect these two points (shown with red dots) where the diagonals intersect with the circle. 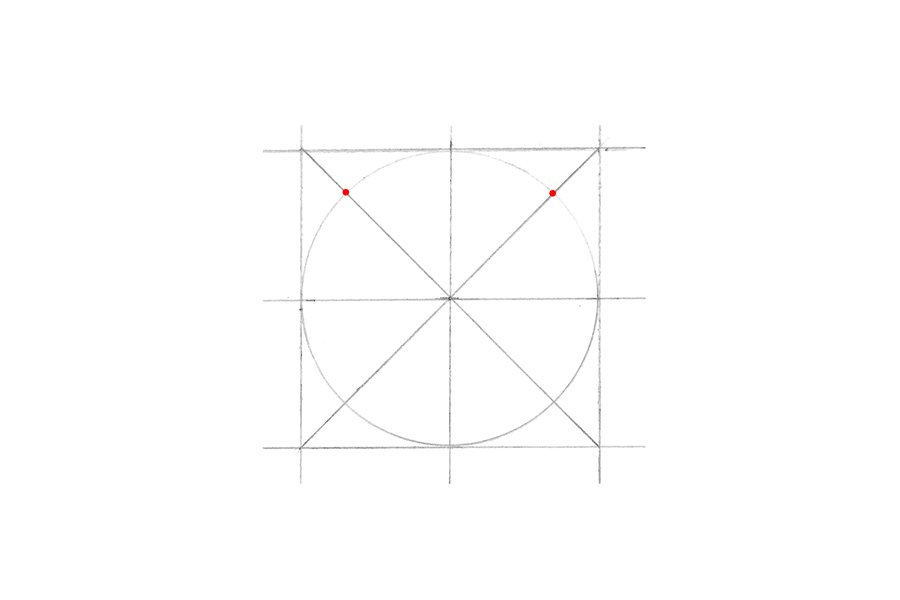 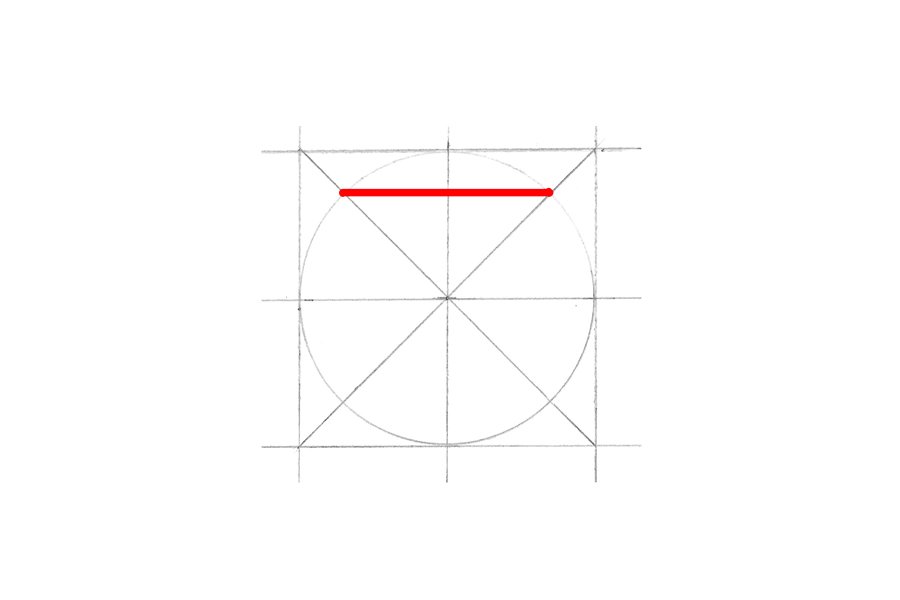 6. Continue round to form a square (the static square). 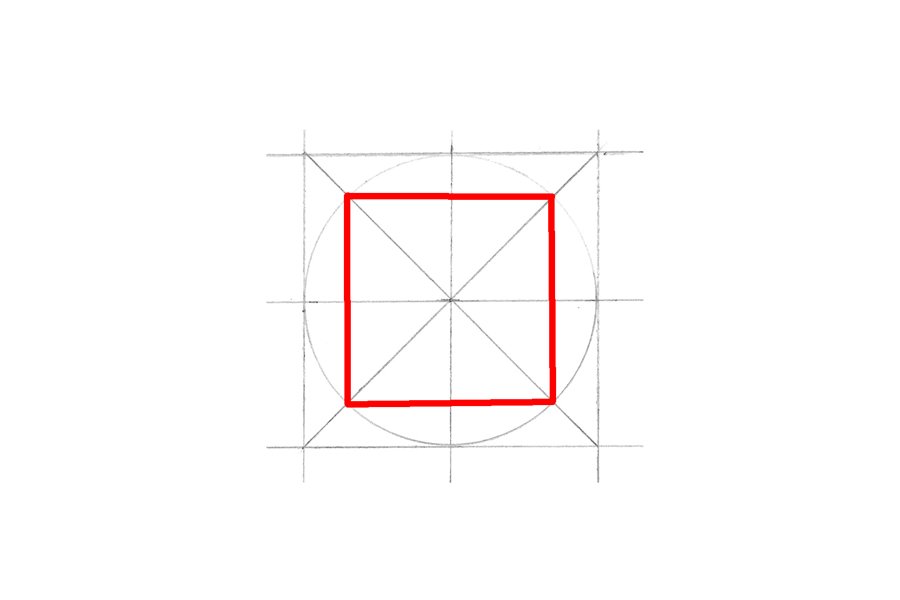 7. Now draw a square at 45 degrees to the previous square (the dynamic square). 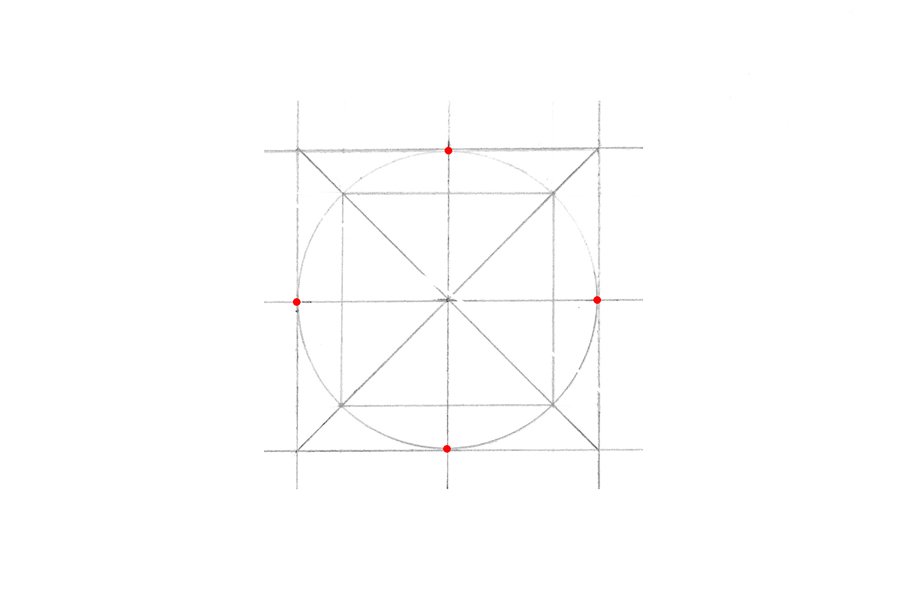 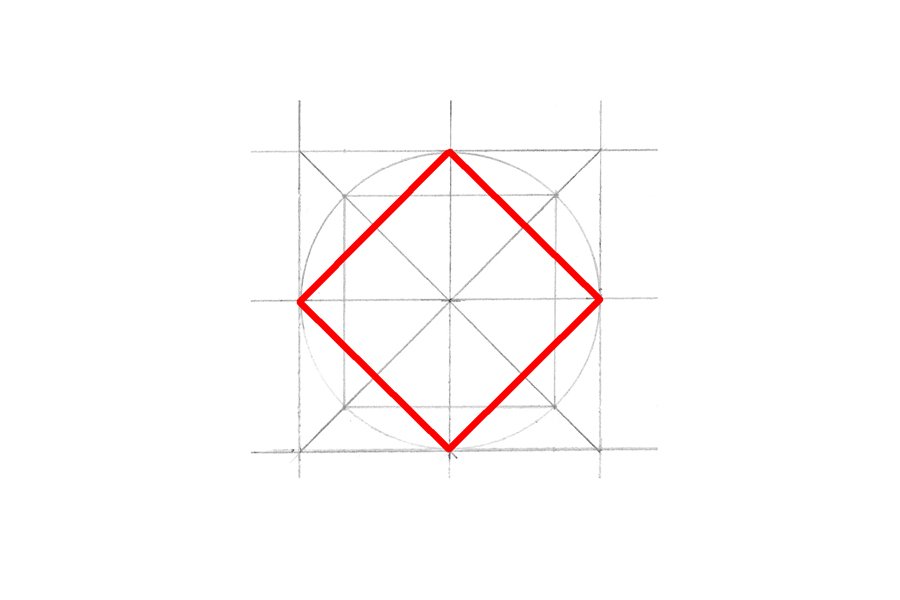 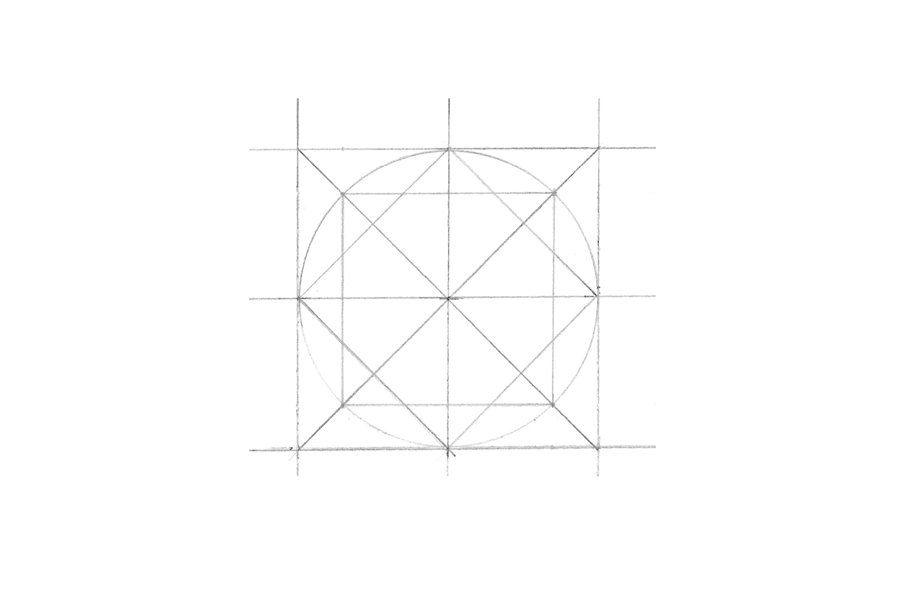 8. Now using an ink pen or coloured pencil, and a straight edge, draw over each of the eight points of the star. 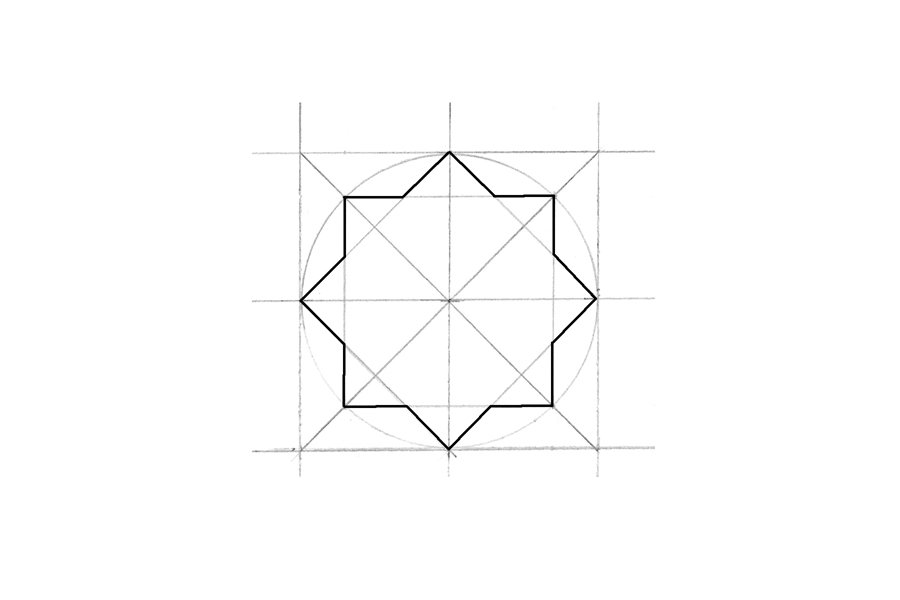 How to draw the star and cross tessellation

Tessellation is when you repeat one element to form a repeated pattern that fits together without any gaps or overlaps. When you draw a series of 8 pointed stars both across and above and below a cross is formed between the stars. There are a great many other ways to form tessallations from this eight pointed star but this is one of the most common from what I’ve seen.

Here’s how the star and cross pattern looks. 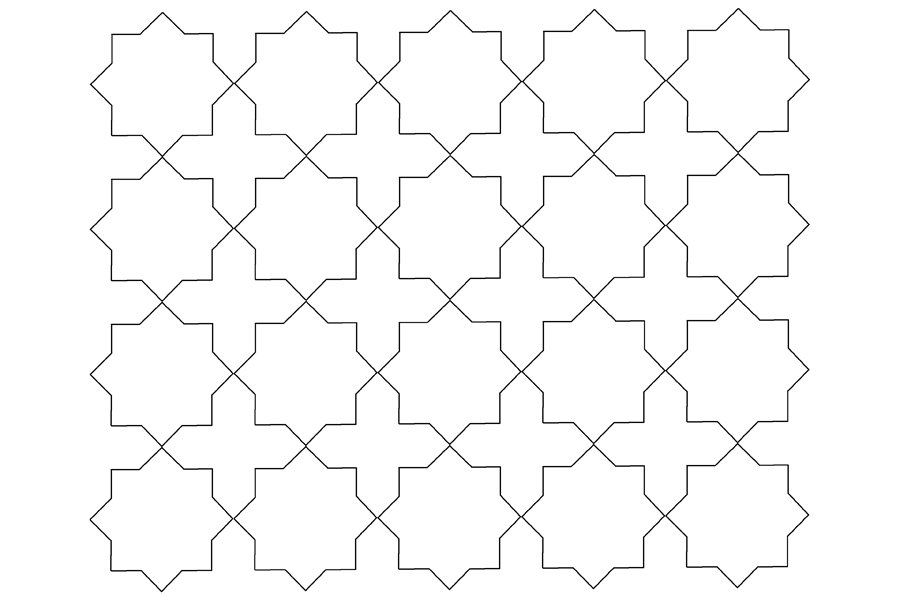 In the following example, I’ve drawn three stars in a row. 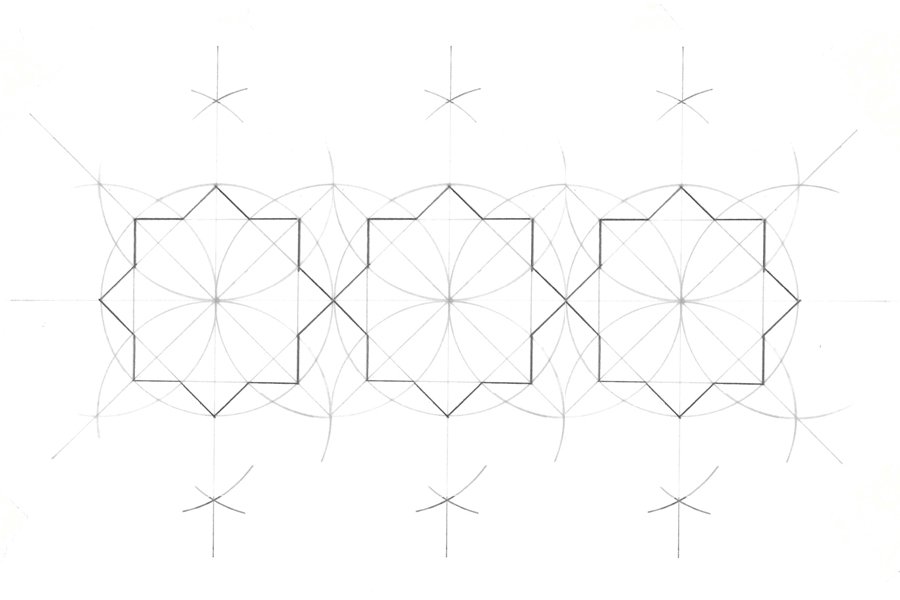 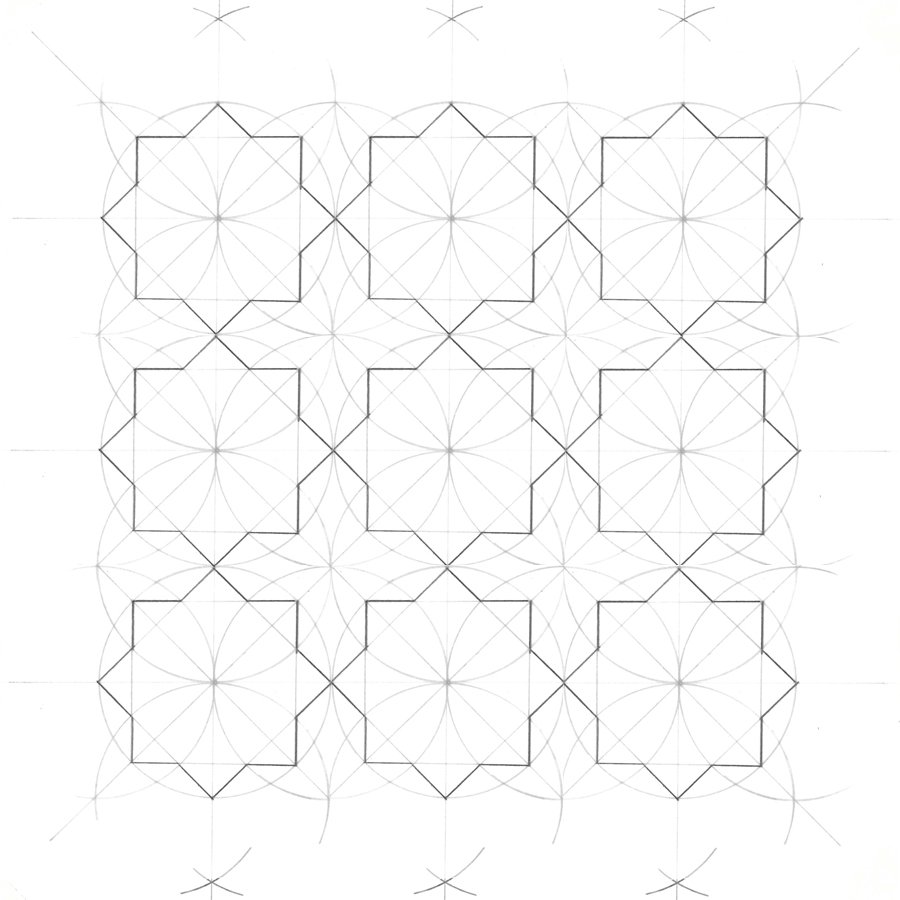 Alternatively, you could start by drawing out a grid of, for example, three squares across by three squares down. Draw your eight-pointed star in one square of your grid by either of the above methods and then trace them into your grid. 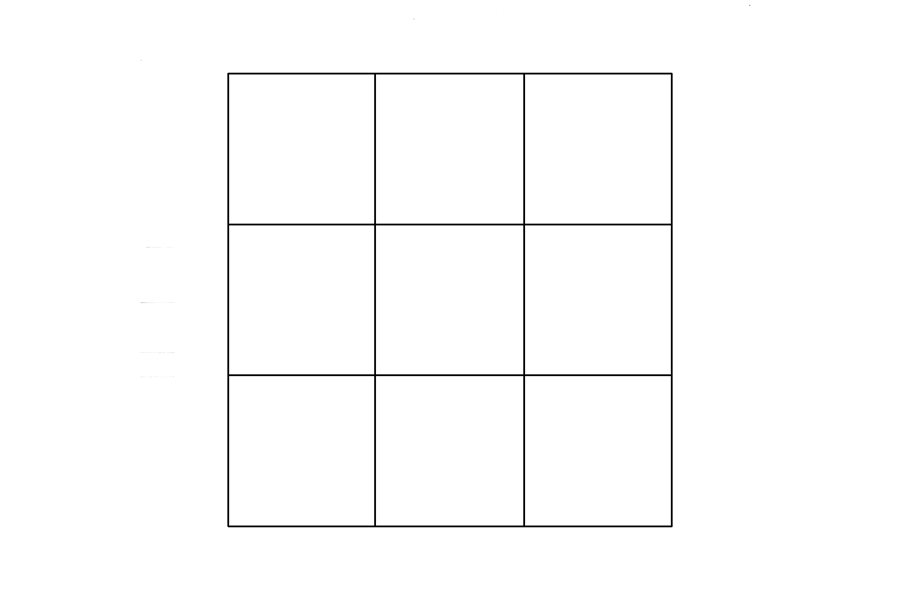 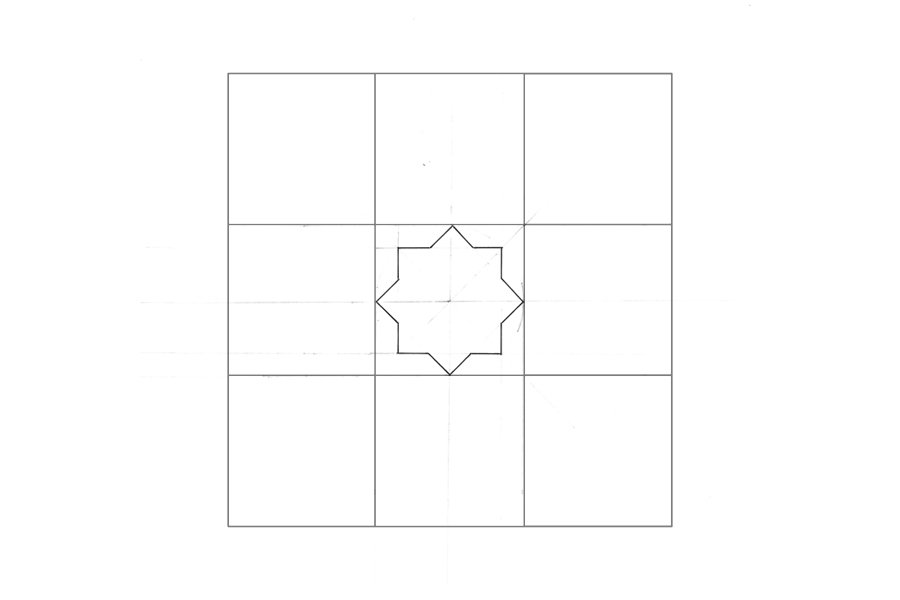 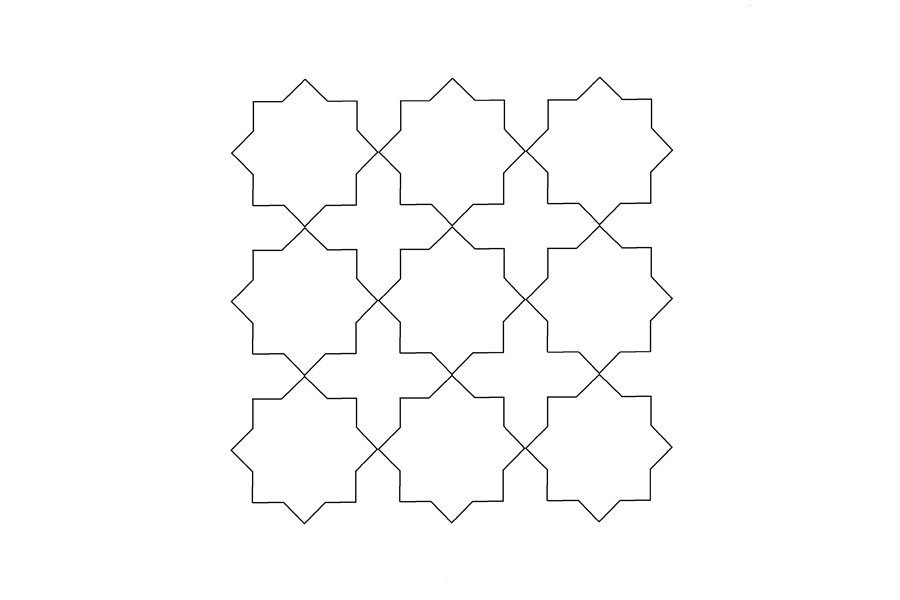 I hope my instructions on how to draw an eight-pointed star, both in the traditional manner and the alternative way, and then how to tesselate to form the star and cross pattern is useful. Feedback is always welcome. If you share your geometric art on social media please do tag me @MandalaMeadow. I’d love to see your work!